269: 6 Skills to Develop BEFORE becoming an Entrepreneur 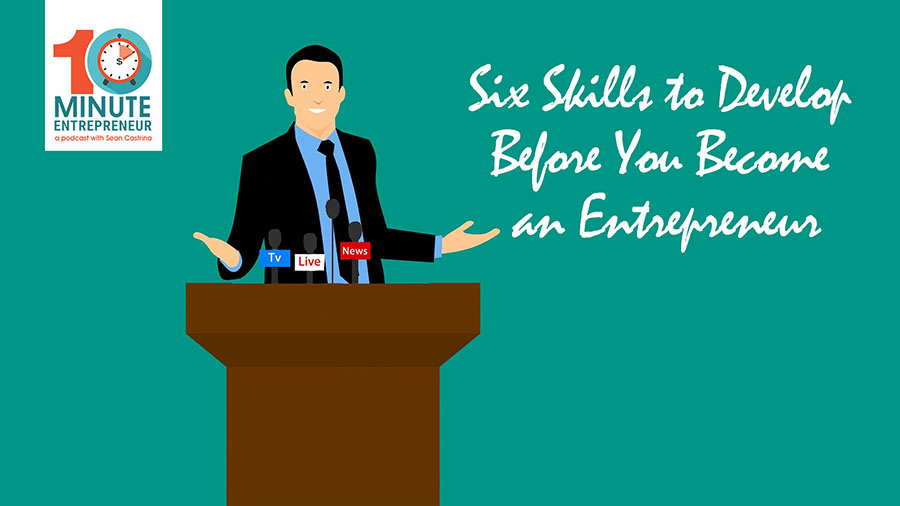 Today we are talking about the 6 Skills to Develop BEFORE becoming an Entrepreneur!

This lesson is called the Six Skills to Develop Before You Become an Entrepreneur. How I came up with this title is I get so many DMs from people that say:

So I’m going to tell you what I would do if I could go back in time while I was in college, and what would be the skills, knowing what I now know, and what I want to develop.

My son, who’s an entrepreneur and who we chose not to send him to college, went a totally different route, which was very uncomfortable. Putting them in college would have been the easy thing to do, and we didn’t go that route. So these are the skills that I want him to know. And I think if you want to be an entrepreneur and you find yourself leaning that way, and you could see that happening, let me give you the six skills that I’d spend some time developing while you’re thinking about that idea.

Get a job selling something, Cutco knives. That’s a great summer internship or whenever you can get it. It’s very common in college to sell a high-end cutlery knife. The reason why I know that I did it when I was going through grad school.

And it was just a great opportunity because I developed my sales competitiveness.

I understood that if I sold this then my income would go up. I learned how to present a product. They had weekly meetings. I had to structure my week in such a way to give so many presentations, and I knew if I gave this many presentations and that half the people bought, and the average sale was this, I could make money. So sales is just critical because if you’re going to launch a business, you better be able to sell what it is you’re offering to your customers. You need to be a salesman. You’re going to be pitching your company possibly to investors. I feel like I’m still pitching my company 20 years later and I’m still excited about talking about my company when I do TV commercials and things of that nature.

If I could go back, I would have sold cars because people come to you, but it’s a competitive atmosphere. I actually did that for a very short time, getting money for my start-up here where I live now. I started a magazine and I sold cars, so I think selling is a skill that you can develop and would be wise to develop.

Read the book, How to Win Friends and Influence People. And after you read it, take the course. Your ability to play with others in the sandbox without sharp elbows is critical. My ability to get people to see things maybe the way I see them without offending them, my ability to present maybe an idea in such a way that it’s in their interest. I’ve got some good soft skills. When I interview people, generally, I come across fairly likable, and I’ve always said, Listen, I’m going an acquired taste, either love me or you have me, but I have the skills when I need to use them. So your people skills, the ability to make good eye contact, a good hand shake, the way that you build a rapport early on in the conversation. People do business with people they like and trust.

Your ability generally just to listen to people, to get them to talk further, to not interrupt when they’re talking, I can keep going, but these are people’s skills and they are critical. They will make you a fortune.

You’ve got tons of energy, you’ve got endless ideas, but my fear is you’re kind of disorganized. You lose focus.

He sent me to a day-timers seminar, where I got to learn, you know how to do prioritize your day. This helped me tremendously. And I took learned how to create and manage projects. In other words, this is the project that could put it on a board. I want to accomplish such and such fundraiser in April, and then I break down all the things that we’d have to get done, and then I learned how to cluster them into groups and delegate.

My point is, I learned time and priority managmenet in project management. I know that kind of all falls in the one, but your ability to maximize your time and get the critical things done that need to get done is just absolutely an unbelievable skill. This way, you learn how to organize your day and get the most important things done when you have the highest level of focus, and you’re not always procrastinating…

We’ve met people like that. We’ve given tasks to people and you never quite know if they’re going to get done. I always tell people, If I’ve gotta remind you, you are of no help to me. If I’ve gotta tell you how to do it and then remind you to do it, you don’t work for me any longer.

Take some type of time management class. It’s tremendously valuable while you’re in school and while you’re younger.

This is a critical skill and you gotta start applying it now. Take action without delay. Stop Procrastinating. Do what you know you should do. The second you know, you should do it.

And this applies to everything. If you’re working for somebody, and they ask you to do something, do it right away. Do it as fast as you can. Nothing frustrates people more than being having to be lead. I’m encouraging you to adopt the skill to take action without delay. Become a reliable person. I tell my staff, give me something to do, I will get it done better than you thought, it’ll be of higher quality than you expected, and I’m going to get it done before you expect it, faster than you expected. That’s a mindset I have in my head. That’s what I do, because I have a lot of business partners, and when I take a responsibility, this is what they can count on. It is going to get done exceptionally well, and it’s going to get done faster than they thought.

Take a speaking class. I had my son take an improv class. So you had to get up in front of the class and you never knew what you were going to say or what was going to be asked, but it was tremendously helpful. You’re always communicating in life. You’re either doing a presentation, maybe there’s a debate of issues, maybe you’re negotiating, maybe you’re sharing a vision. You want somebody to join you on this journey, maybe you’re pitching your idea to investors. Your ability to communicate an idea, a thought, your passion, your vision, your idea to pitch in sales. If you have horrible communication skills you’re not going to do very well at that so any time you can develop your communication skills, do it.