Ep 352: Average Hires are YOUR Problem 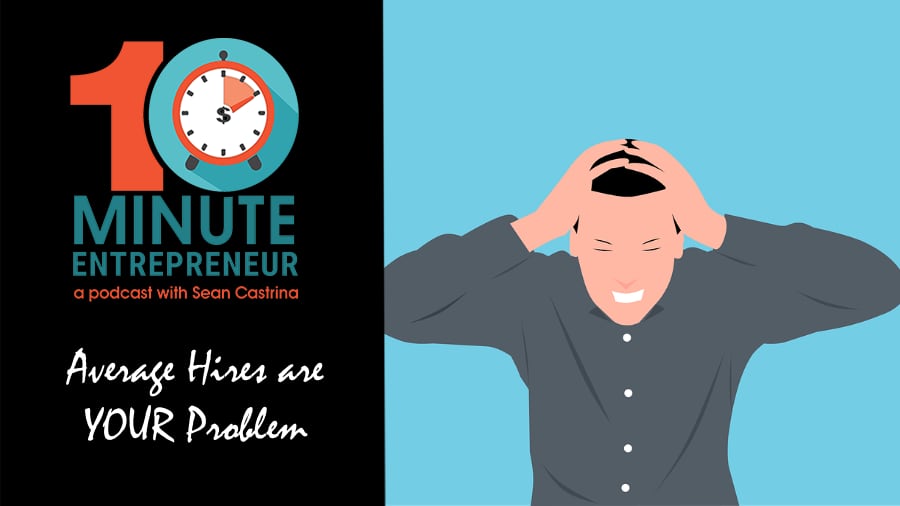 Guess what… at the end of the day, that bad hire is YOUR fault! You allowed the bad team member to join your team and infiltrate your staff.

What’s costing you money? Average hire sare keeping you from going to the next level.

If you know anything about me and my podcast, you know that I’m involved in every high level hire in my company. Why? Because I want to be absolutely be involved in that dialogue.

I just had a big interview yesterday. We were expanding to another city and testing of franchise formula, and so the hires are very, very critical. We actually had the person’s wife there because we want to get a feel for the whole family. When you’re launching a new area, it’s a lot different than when you have a pre-existing area and you could just write and plug people in, rinse and repeat and all that. You’re starting out with something new, so the hire was different.

At the end, I tell my partner, he’s a seven. I don’t like seven. See, if you took everybody you interviewed and you couldn’t have the number seven, who would you hire? I did a podcast years ago about the concept of this. But I want to think about that for a second. We grab on to sevens, especially in a bad marketplace. I understand sometimes you gotta hire people to open the door, but you cannot have a team of sevens, abd win. You are not going to grow a group of seven, you know why? Because unfortunately, sevens, when they don’t want to put a lot of energy in that day, there turn into a five. I’m hiring eights, nines and tens. Eights, nines and tens on a bad day are sevens. I can live with that.

So I want you to look at your hiring and ask yourself, how can I hire better people? What if I eliminate the number seven? I understand it’s hard to hire ANYBODY right now. Hey, I have expanded my search, and this is crazy for the type of company I have. Every state that touches Virginia, I’m interested in. I converted one of my real estate properties to a duplex to provide housing so that we could vet employees. When you have a local college football team in this area, it’s like $900 for like a hotel room on a Friday or Saturday, so when you’re spending $2500 in the fall to put somebody up for the week, that gets a little bit much, so I converted one of my properties.

Why, I need to hire eights, nines, and tens. That’s how you grow a great company. I’m going to throw a bonsu on this episode: You need to grow people or let them go. You’re getting two for one today, because we’re talking about hiring.

One of the big problems that we have is, is that people come work for us and we never take them a little bit better. This is what I can say comfortably. If they give us the opportunity, we improve them. Everybody who walks through our doors, I told you the story once about one of my key employees came on in 2006 at $18 an hour. By the time he left us, he was making six figures. He’s working for someone at $85 an hour now. What I love is that that I thought he was an eight and and worth $20 at the time we hired him and we turned him in to somebody that now someone believes he’s worth $85.

This is my point, you don’t have talent like that when you’re hiring sevens.

I can’t think of anything that I’ve done for my company that wasn’t a critical hire that moved the needle more than anything else.