Ep 178: Why be an Entrepreneur 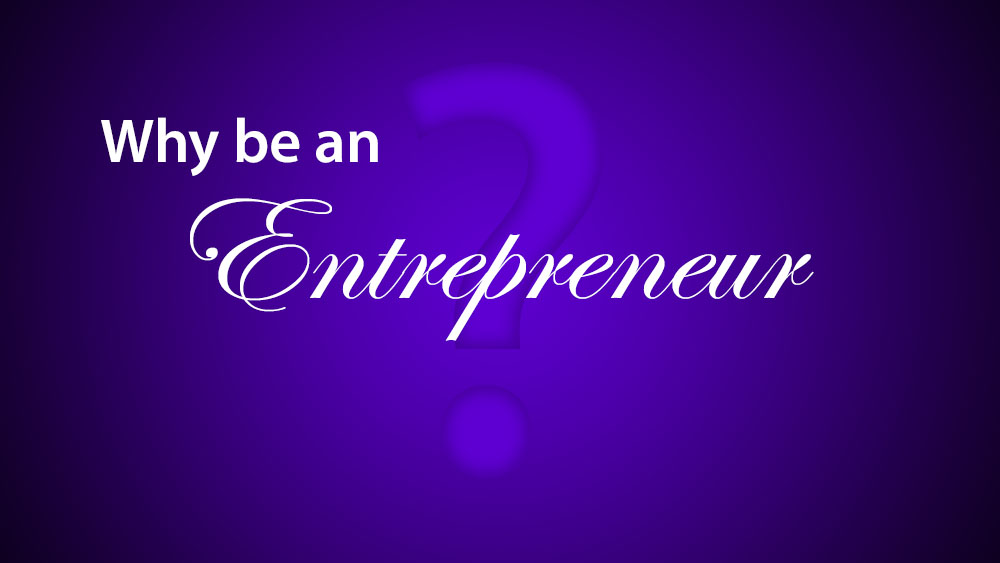 I have the privilege of speaking at a lot of colleges and I speak to a lot of entrepreneurial students. And the big thing I try to find out is why do you wanna be an entrepreneur?

I think “why”, in general, is important. You need to know your why for anything.

So, I’ll look around the audience and I’ll look at a gentleman and I’ll ask : Why do you have a girlfriend?

Someone gives me a dumb stare and I say, “cause she’s beautiful, right?”, and then he nods his head.

We All Have a Why

And if you’re considering your startup journey, I hope today’s lesson will motivate. It is the highest paid profession on the planet.

Let me repeat that.

Eighty-percent of millionaires are self-employed and most are somebody who started a business. It’s the most highest paid profession in the world.

It Doesn’t Disqualify You

The fascinating thing about entrepreneurship is it has no “disqualify-ers” other than laziness. The ability to run from any level of risk.

It rewards someone who has an idea and takes a relentless pursuit of it.

That’s how you become a successful entrepreneur. You have an idea you think has the potential to be amazing you take action on it.

Let’s take it back to baby step-level entrepreneurship for a second. You buy a franchise. Even that still requires you to take a level of risk and to take action, but if you do any of those and you become an entrepreneur, you go into an exclusive club that is like no other.

One owns a retail party store. He saw a need, partnered, went into a party store and does exceptionally well. It gives him the flexibility to watch his kids play sports. His kids are great athletes and he’s never missed any event that ever had to do with them.

Another poker buddy of mine owns a retail store that sells bikes and he loves to play softball every night of the week. Yeah, literally, every night of the week, and then come to work the next day between 12 and 1 PM, then leave around 4:30 go to the batting cages and get ready for softball that night. I have no idea how much he makes. I know that that business model and schedule works for him and he’s happy with it.

I have another friend who is into roofing. He takes money out in duffle bags. He went through high school, started understanding a trade over the next few years, learned everything about that trade, and then turned it into a business. He literally started it in a McDonalds where he would meet with one of his first employee to go sell the jobs. They  now do probably close to $10M and he literally takes it out in duffle bags.

And he started it because this was something he knew. He knew everything about roofing  and it just made sense to him. He was an expert at it. Why wouldn’t he start a business in it?

Why would I be an employee when I can do this I could run it from top to bottom?

So I don’t know what your why is but the most flexible schedule in the world is an entrepreneur. If you’re a doctor or you’re a lawyer, you’ve got to be in court or you’re got to be in the operating room.

An entrepreneur really, in most cases, doesn’t have to be anywhere they don’t want to be. The more successful you are as an entrepreneur, the more flexible your schedule is, and the less you do have to do the things you don’t want to do.

I can say now 80% of my schedule is only doing things I want to do. The list of things I don’t wanna do, that I actually have to do anymore is extremely small. So the flexibility is fantastic.

They just kinda weave into another lane or they slow down.

Can you see Warren Buffet retiring? He spends 80% of his day reading. What are you gonna slow down from? All he needs is his brain to work.

If you follow a good business model and you’re not the technician in your business, you should be doing nothing at this point except forming the team, casting the vision, organizing a few things, and keeping track of the numbers. But you should not be beating the street anymore. There’s never a reason to retire.

I hope to work until they put me in the box. I hope the older I get, the more value I offer. I hope I never stop seeing business opportunities.

So Why Do You Want to Be an Entrepreneur?

The front end of being an entrepreneur is like a roller coaster. You go straight up, you work your tail off, and then you hit some curves and obstacles. You persevere through them and then the rest of the ride is fantastic.

Why do you wanna be an entrepreneur?