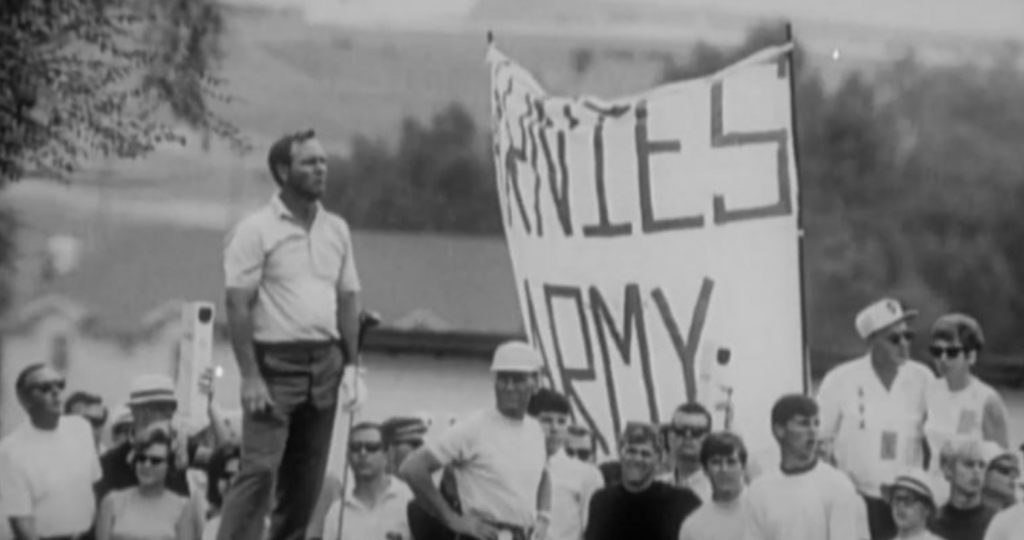 What am I talking about? I wanna go back to Arnold Palmer’s story, because he created the super fan. He created the raving fan. He created sports marketing as we know it. He created personal branding before there were the Kardashians. He was the originator. There would have been no Michael Jordan had there not been in Arnold Palmer. Think about this. More than 50 years ago. This is a gentleman who had not played competitive professional golf at the regular tour, since in the early ‘1970s.

Last year, he was ranked seventh for his aspirational score in Repucom’s celebrity DBI, it measures the degree to which people feel about the celebrity. He was tied with Stephen Curry! Think about it, he’s been dead for three years! He was only one spot behind Warren Buffett!

In the late ’50s/early ’60s, his fans would follow him all the way up the fairways. You see it now with Tiger Woods at the 18th hole at the Masters…but they followed Arnie the whole course. He was a blue-collar person from Pennsylvania that they cheered for and he just had that image. The men respected him and the women thought he was pretty handsome. And that image created the entire endorsement industry. He partnered with Mark McCormack. who founded IMG, which manages Tiger Wood. But it all started with creating this iconic image that made people want him to endorse their products. John Deer, Mastercard, it’s endless. His iconic logo with the umbrella.

How to Create Raving Fans

When somebody’s experienced Apple, they’re hooked. The get the iPod, the computer, and the iPhone. There’s something about those devices that you experience and you become a fan of them and the company.

Once you shop at Nordstrom, which I did, you’re hooked. If you’re gonna buy clothes in the retail arena, Nordstrom will absolutely hook you.

My first experience: I walk in the store, I go up an escalator, there’s this gentleman in a tuxedo playing the piano with a wine glass on top, and then somebody takes you through the men’s store and shows you everything you want. If shopping is in heaven, it looks like Nordstrom and I was a fan from that point on. I’ve been shopping there for over a 30 years now.

1. You Give Them a Reason to Be Your Fan

This just means you become great at what you do.

If Arnold wasn’t a fantastic golfer, he wouldn’t have his army.  Or Tiger Woods or LeBron James. You have to be great at what you do. The products you deliver need to be fantastic and the service you provide has to be exceptional.

2. You Engage With Them

Through social media now, it’s easier than ever to communicate with your customers and fans. You need to be likable. You need to be a company that they admire. And this may be through a giving campaign.

If you become a likable company, you’re different. There’s something about your company that’s unique. That’s a brand position in and of itself.

Certain athletes that don’t even try to be likeable and that can also be a brand. Dennis Rodman, at the time, got an unbelievable contract. He got a 10 million dollar contract just because he was the bad boy.That was his image and it worked for him.

3. You Show Appreciation For Them

What do you do extra for your loyal fans? What Arnold Palmer did, which is amazing, is he wrote letters to everybody who ever wrote him in his office in Pennsylvania. He signed letters all day long. And what made him unique is a signature. It’s absolutely iconic. It’s literally the pretty signature in the world. It is a logo in and of itself, it’s meticulous. So when he signed something, his fans knew that he took the time and didn’t just scribble something.

If you’re not great at what you do or if you don’t provide incredible service and you don’t have a fantastic product, it’s not gonna happen. Do you communicate with them and engage with your customers? Do you speak their language? Are you likable? Do they admire your company? Do you guys stand for something?

Do you have any charitable endeavors?

Maybe you’re just different, different works. Do you show them your appreciation? Do you cultivate this fan base? Do you do things extra for people who patronize your business?

I encourage you to create some raving fans, your own Arnie’s Army.

What I’ve learned in my businesses has created enough customers who’ve received my personal phone number over the years, that I could make a substantial living just with the one or two phone calls I get every week that I have to push over to my office. Because over 20 years building a reputation on delivering what I promise, I have a following and they pay me premium money to do what we do.

So I encourage you create some super fans this week.