Ep 195: How Trump and Obama are SO SIMILAR 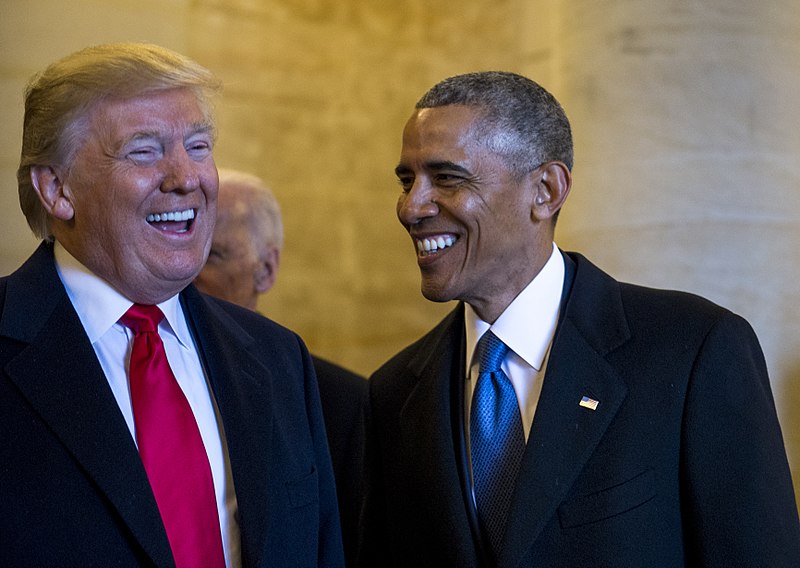 YES. Put me on the record for saying President Trump and former President Obama are very similar. There things both Obama and Trump did that set them apart from their competition. Send this podcast to one of your political friends!

The Blueprint for Success in Politics

There’s so much going on with politics right now. Obviously within the next couple of months, we have some presidential Democratic primaries and it got me thinking. Recently I’ve noticed that President Trump and President Obama are so much alike.

I know right now, you’re reading this and you’re thinking… Are you insane? No two people could be more different.

Actually, I’m gonna share with you quite a bit of similarities between the two and why you need to emulate both. Because what they did to become president is the blueprint for being a successful business.

Oh, have your attention now. So why in the world are they so similar?

I read the book called power forward by Reggie Love. Reggie Love played for the played for Duke basketball and he was what’s called the body man for President Obama when he ran for office. And then when he took over the office, he was essentially a personal assistant. Get my suitcase get my coffee— get anything. But I don’t wanna minimize that. Because Reggie was far more than that. He was a trusted confidant and was just an absolutely valuable person for President Obama. So I don’t wanna minimize his role at all. And it was a fantastic book, and I think President Obama is a tremendous human being, but he and I we would probably disagree on a political level on how to accomplish everything he wants. I would probably do it 80% different than he does, but there’s no disputing the quality of the individual.

So what is it about President Obama that’s so similar to Trump?

This is based on my reading from Reggie love. There are a lot of the qualities that you don’t see about President Obama, that got him elected. And some are obvious in the political realm.

Whether you agreed with him or not President Obama got your attention. Remember the book, The Audacity of Hope? He was absolutely a charismatic figure, no question.

What was John McCain’s platform? What was he running on in 2008? Does anybody have any idea? How about Mitt Romney. Have any idea? I’m not even a Democrat and I can tell you Obama’s Hope and Change. It was compelling and it was a concise message.

Oh, absolutely different styles. Don’t get me wrong. But are both phenomenal communicators.

President Obama did not just have voters. He had raving fans that got him elected. There was about a million people in Chicago who came to listen to his acceptance speech.

In the book by Reggie Love we read that Obama was an unbelievably tireless worker and has what it takes to be president. It literally blew me away how hard he worked. And how hard you have to work, it’s unbelievable.

So let me go over present or Obama’s characteristics aganin:

Now let’s see how these qualities fit with President Trump

Yes, without question, again, I’m not asking you to like anybody, but you can’t argue that he doesn’t have tremendous charisma.

Now, let’s compare that to Hillary Clinton, who they both beat to the Presidency. Was she charismatic? No!

What was Clinton’s? Stronger Together? Are you kidding me? That’s the best you could come up with?

Watch him on stage. He’s a machine. I heard a great analogy the other day: When he’s on stage or debates another person, it’s like watching Godzilla.

He Created a Following

There’s no doubt about that. From the very beginning he was filling up airport hangers with 10k people. Now he fills up stadiums.

Now I’m not telling you have to like him. But I like the stock market right now.

So that is the formula.

And let’s look at who they beat: They both beat Hillary. Trump, knocked out 16 or 17 other Republicans with this formula. Can you name the message, the slogan of any other of the other candidates he ran against? NO! But I can still remember Obama’s from 20008 and I’m not even a Democrat.

This formula works. I’m gonna take you back even a touch further. Likeability is this x factor.

Bush is finishing his first term winning a war for crying out loud and is the most qualified person ever hold office. He was the head of the CIA and Vice President for eight years under Reagan. How in the world does Bill Clinton, a Governor from Arkansas, beat a George Bush?

Well, this is the formula! He was charistmatic! He had a compelling message.

Do you remember what he said? This is what won it for him: when he looked into the camera and he said, I feel your pain.

Do you remember that? “I feel your pain”?

That’s what won it for him. An incredible message. A phenomenal communicator. A tireless worker. And then he was likeable.

He was likeable even to the other side of the aisle.

I read a book by Colin Powell, who was Secretary of State under George W. Bush.  In it, he was talking about a Rose Garden ceremony where he was being honored by President Bill Clinton, because Powell had been the Head of the Joint Chief the staff under George HW Bush. They were in the Oval Office getting ready to go out,and he was talking to President Clinton and noted that President Clinton never ever looked at his watch. He wrote about how he was talking to most powerful and busiest man in the world and he looked like he (Colin Powell) was the only thing that mattered. Tremendous likeability.

What Companies Can Learn From Trump, Obama, and Clinton

Does your company, your product,  or your service stand out in the crowd or are you just average?

Do You Have a Compelling Message?

What are you offering and does it grab the attention of the marketplace?

Are you Communicating Effectively?

Is your marketing effective? Right messaging and tone that your audience understands.

Are you relentlessly pursuing this business venture?

Do they become raving fans?

You can follow the formula of President Obama, President Trump, and President Clinton.

Look at all the individuals they beat. They all failed for the same reason and it just says a lot. I think you should model your business more like Trump and President Obama and I think you’d be better off for it. Start being a little more charismatic, have more of a compelling and concise message, better communication. Create a following, and work tireless. You cannot go wrong with that formula.