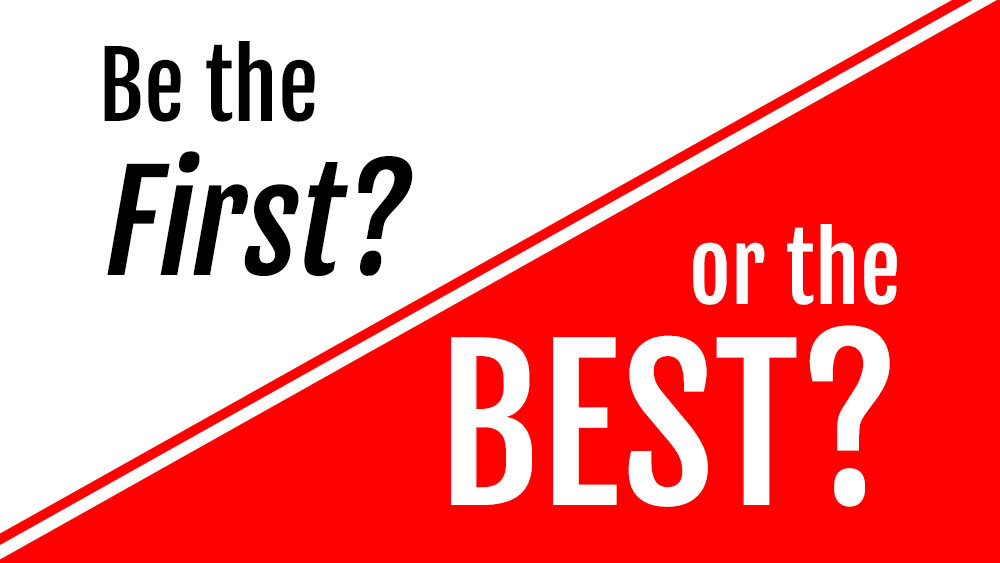 In today’s episode, Sean talks about the importance of being first or being last, but make sure you are not in between! Apple and Google were surely not first, but they are definitely the best!

Today, I’m going to give you two pieces of great advice. If you’re looking to start a business, you need to be aware of two things as you enter the marketplace.

Your business needs to either be the first or it needs to be the best. You better be one or the other, or you’re going to be out of business.

A lot of people think Google was first search engine. Nope, they were like the 13th in the entryway of web search, Being first is what’s called “Blue Ocean Territory”. You’re new in the water, there are no sharks out there like an Uber or Lyft or Airbnb. Typically, if you can be first like Microsoft, you can be a billionaire.

But look at Apple. They weren’t first in anything.

So now you’re past the proof of start-up and you take aim at your competition. They are your target, you know what to shoot for, and you begin to game plan against them. Where do they lack? Where do we have strengths? What if we did something different? Could we be faster than them? Where could we improve quality?

Quality means your customers can tell your product or service has more quality. It is quantitative. It does not exist only if you think it does.

Have you won awards? Can you offer more for the money if somebody buys your product? Did they get something more? Is there more value-added to it?

That’s how you become the best.

Do you have an incredible buying experience? Do you have unbelievable customer service?

Be First or Be the Best

You have a business that you want to move into the marketplace: you need one of two things: You need to either be first, which is great but rare, or you need to be the best, which is actually easier.

Find your competition and post them on the board. Find all their weaknesses. It’s just like game planning for a football game. You see what your opponent’s going to do and what you’re going to counter it. When I see my competition in a commercial or a digital ad, I immediately start figuring out how I can counter it with language. Can I use it to attract customers? They’re trying to get work, and I position our company even better.

I remember when we had a major competitor…This is really kind of funny because I was sitting on the toilet on a Sunday morning. This is when everybody actually got newspapers, and I opened the newspaper and a full-color flyer pops out.

It was the national leader in what I was doing for a living. The biggest franchise came to my town. They were coming from another bigger city.

I already had something falling out, but now I’m looking at something falling out of my pape and giving me a heart attack! But when I looked at it after I got over it, I wasn’t all that happy about it. I looked at where they had a weakness. They were charging for estimates. Now, they were only charging $25 for estimates, but we were doing estimates for free. Then I noticed that they couldn’t give you an estimate fast. It was always a week later. Needless to say, we were better and they were out of our area within two years.

So what did we learn today? We learn two things: We either want to be first or we want to be the best. You can be the best. Start your business with that in mind. Don’t just start a business to start it. Have some clearly defined entryways: