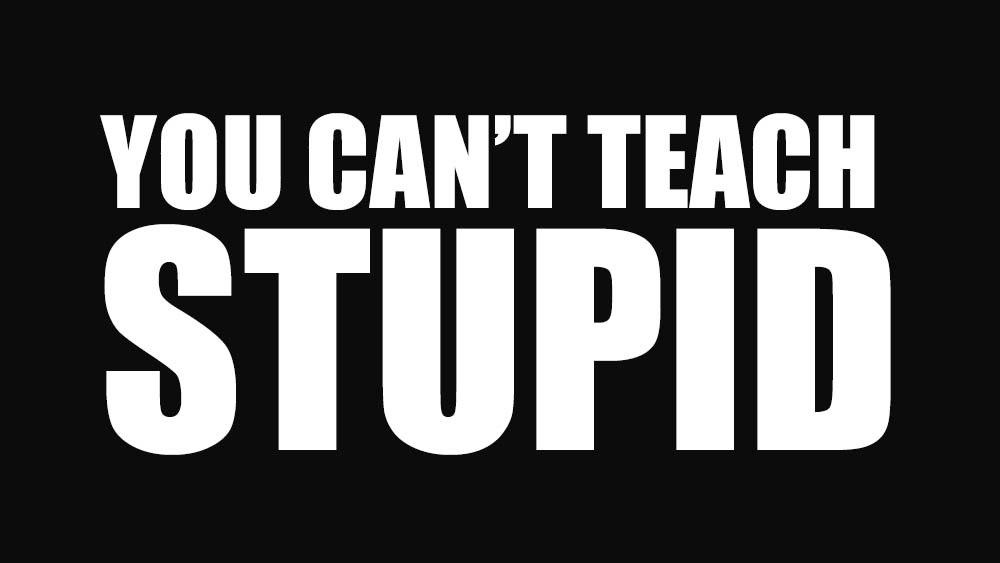 You can’t teach stupid! Today we talked about how if you weren’t labeled “smart” in school how you can still be extremely smart!

What Smart Is and Isn’t

We’re talking about being smart.

Yes, being smart. Why is that an important topic? On Instagram and in emails I constantly get a question that typically has to do with how can I be a millionaire, how can I be successful?

And I’m telling you, be smart.

But let me first tell you what smart is not! Smart is not your SAT scores. My sats are in the low 800s, and that’s back in the old system. Believe me, that’s nothing to brag about. You only needed 700 or above to be able to qualify for an athletic scholarship, which is all I was seeking, but I wasn’t a rocket scientist when it came to math. I figured if I could do addition, subtraction, and division that’s all I needed. When I was sixty feet away from a telephone pole, I never wondered what angle it was at or had a need to know ‘a + b = c’

I never saw that as realistically as something I wanted to learn.

When it comes when it came to history, I knew Hitler was bad. The point is, even in high school, I kinda decided what I thought was valuable and what I didn’t think was valuable.

So it’s not your SAT scores and it’s not your GPA. I had a two-point-something GPA in high school. When I went to college, I had a 4.0 one semester, and in grad school, I had a 3.86. Smart didn’t correlate. I didn’t have the SAT scores that would line up with a high grad school GPA, but as I went into grad school, I was doing things that I was more interested in, so I did better at it.

Being smart is not your SAT scores, it’s not your GPA, and it’s not your knowledge of “Jeopardy” questions. This past year, they took the last three finalists for one show and they battled it out. I couldn’t answer one in every 30 questions that went up. I literally felt like I had a learning disability. I don’t think that makes you smart. To me, it’s like, useless knowledge. Who won a Tony Award in 1926 for a play that I will never want to see? I don’t need to learn that.

Let me tell you what I think smart is.

Getting Paid for Your Passion

Smart is when you are financially independent. I don’t care how smart you think you are…I don’t care how many degrees you have. If you’re one paycheck away from being broke, in my opinion, you’re not very smart.

Smart is when you have an area of expertise that’s 95% better than everybody else in the world. You only have to read two books on any given subject, to be in the top 5%. So I’m not saying that’s hard to do, but what is your area of giftedness, and are you developing it? Maybe it’s leadership. If you are a graphic designer, are you constantly improving your graphic design skills? Are you a doctor, a nurse? Are you constantly improving yourself so you’re not just good- you’re great. Smart is when you have expanded and you have developed your area of expertise so that you are in the top 5% because you get paid really well when you’re great at something.

Smart is learning from mistakes and not repeating them.

I’ve made some tremendous mistakes over the years. I remember in 2006, I had a business that went under and I lost $50k, and at the time, that seemed like a lot to me. I mean, losing $50k is not fun no matter what, but to just lose it as if it simply vaporized wasn’t any fun.

25 Years ago I lost $11k on a stock trade. It wasn’t very fun, but both those situations have actually made me money because I learned from them. Now, I don’t buy an individual stock, I buy indexes, so I have my risk spread out a little bit. I don’t buy a stock based on someone giving me a tip at a softball game.

Smart is when you leave a legacy. With my children, I like to know that I’ve left a legacy of financial education.

My children will tell you just real quick “how do you get rich”.

Don’t live on everything you make, put away 10% long-term in the stock market, don’t touch it, and then put 5% in savings that way you have a massive emergency fund. My kids could recite that like the 10 commandments. My kids can recite that advice like their social security number because that’s just a golden rule that I’ve shared.

Being Smart in Business

Faster than other people you just do. If you’re growing your business intellect, you just see opportunities faster. I see them all the time.

Why? It’s based on your confidence in your judgment. You’re growing smart, you’re reading, you’re understanding the industry you’re going to webinars, listening to podcasts. Your intellect in this area of business you’re in is very key, so you’re very decisive which means you’re far better able to create execute a plan.

The chronovirus is an example of that. If you’re an airline or a cruise ship, there’s nothing you can do, but some businesses you can create and execute a survival plan. I say survival because it’s probably not a growth time for certain industries. For most of us, it’s a survival time.

You Attract Other Smart People.

An idiot will attract other idiots. Birds of a feather flock together.

I would tell you, the people that I work with are extremely smart in their area of giftedness. Now, I don’t want everybody to be gifted in my area…but on my team, they’re great. I’m blown away by how much talent I have under my roof. I just don’t see a real dumb person, attracting somebody smart. The smart person is going to figure out your dumb and then quit.

You Innovate by Nature

You See Change Before Your Competition

We see change before everybody. Have you ever spent a bunch of time brainstorming email subject lines only to be disappointed by the open rate? Why not just text your customers instead? SMS open rates are 98%!. That is what happens when you’re smart.

But this is a different type of smart I’m talking about. Again, this isn’t SAT scores or your GPA. This isn’t your understanding of Jeopardy questions.

So How Do You Grow Smarter?

Appreciate intelligence, especially in the area that you’re going to make a living. I like being around smart people, in any area. Appreciate expertise in others.

You need to recognize that smart being smart, has a pay off. You’re going to see opportunities before others do, your ability to be decisive, your ability to innovate your ability, to see change before your competitor. That’s the pay-off. You can read, you attend seminars, you listen to podcasts. There are so many ways you can constantly improve your intelligence.