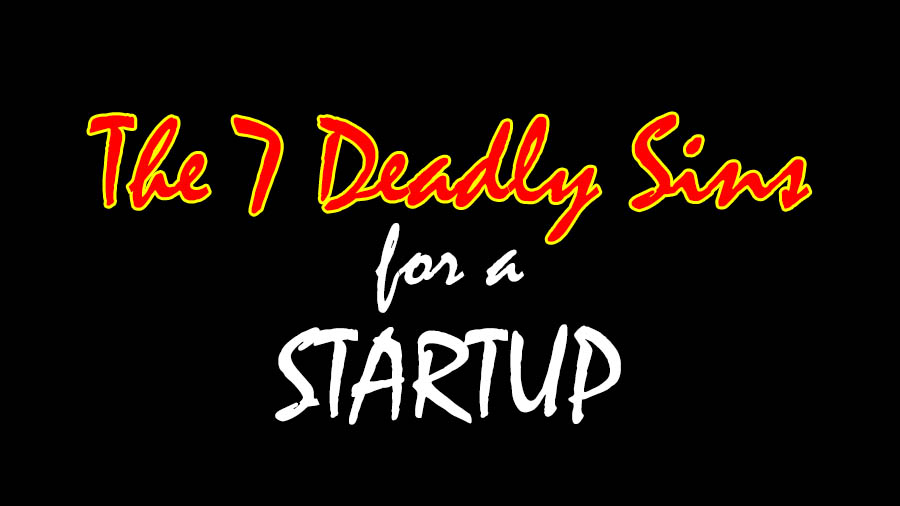 What I want to talk about today is the Seven Deadly Sins of a Startup.  Any business will absolutely fail if it falls into one of these seven deadly sins that I find in start-ups.

The Founder Falls in Love with Their Idea

You’ve heard me say this before, but they fall in love with it and they pose every question like this, like let’s say they were looking for criticism.

Mary, don’t you think somebody will want it?

The founder falls in love with their idea and they don’t allow it to be challenged and when they even pose it to people, they pose it in such a way that the answer is kind of rhetorical.

Mary, that’s the best idea I’ve ever heard! People are just going to buy that like crazy!

You have to allow your idea to be challenged and to be tested. If not, it’s going to get its first punch in the first round of a fight and it’s not going to get up, so you’d like to spar a little bit with your idea to make sure it is sound.

There is No Wanting Marketplace for What Is to Be Sold

They have a product or they have a service or something that they believe people will buy, but then when they offer it to the marketplace, it’s crickets.

The problem with this is they didn’t test it. There was no beta testing, I tell people, listen, I would rather you not even have a finished product that you could sell.

You have a product, you’ve had it manufactured, but you don’t have it in mass. But you’re smart enough to know you have two or three manufacturers that would do it and they’d be able to have it in such and such amount of days before you went and purchased a thousand of these. I would test the market place to see if it’s receptive to buying it first, so before I bought 1000 of these and got that great manufacturing discount, which is a fool’s game, is I make sure the marketplace is waiting for this. Then if I get a receptive marketplace, then I place my order. Worst-case scenario, I reached out to the people that placed orders and say, because of the overwhelming demand we are going to be two weeks behind. It’s better to do that.

So you gotta test the market place as well.

I don’t start companies where there’s tremendous competition and I don’t see any weaknesses. I’ve had ideas for businesses and then when I did a review of my competition, I didn’t see where I could have a competitive advantage.

And thus, there’s no reason for a customer to buy from my company, so that’s the third deadliest sin.

I’m going to start with my Facebook friends and all this.

It’s like a ride at an amusement park. Customers go on the ride, they get off the ride. As they get off, you better have new ones getting ready to come on, because if the only ones who liked your ride are the ones getting off and you don’t have any coming back on, you’re not going to be in business. You need to market and you need to acquire more customers.

Then you need to have sales and promotions and get people to buy today. If you’re not marketing your business, that’s a deadly startup sin, and if you think it’s going to be a word of mouth business, good luck on that.

You hire friends and family and this is just awful and really crushes you. It crushes you in sales. That’s where I see the biggest weakness in hiring people that you know.

Poor staffing crushes you. You’re not able to deliver consistently on the promise you are making to your customers when you have poor staff.

If you don’t handle your personal finances well, you will probably not handle company finance as well, so you need to manage the money well. You need to manage the cash flow. You can’t fleece the account every Friday because there’s a little bit of money left over in it. You need to put money aside in reserves. You need to put money aside for growth opportunities that will present themselves. If you mismanaged money, the company has a very little chance of survival because once it gets hit with a storm, and there’s no money in reserves, you can’t put your hands on money fast and you’re going down.

You have your plan, and as I’ve said, the great entrepreneur, Mike Tyson once said,

Everybody has a plan until they get punched in the mouth.

And you’re going to get punched in the mouth.

In every startup I’ve ever done, something that I never saw coming presented itself within the first two years. And if I didn’t make an adoption or a change, we would have been potentially out of business, or we absolutely would have missed a growth opportunity that was staring us right in the face. Had I not adapted to it, seen the opportunity, been alert to it, or financially in a position to take advantage of it, we would have never been what we are.

I look back on one of the companies that I started, and it was a handyman company. Six weeks into it I had 54 phone calls in one week for people needing our services, and I knew that I hit the mother load. Because I had not spent any of the money that had been coming in and been putting it aside, I had two opportunities.

The first one was I had the opportunity to buy a painting company and I actually bought the painting company the very next day. The person who I bought it from, I offered him a piece of the partnership back because I wanted him to run the day-to-day operations of the construction company because I wasn’t in the office and didn’t understand construction. So I had to take advantage of that. That cost me $10k. That’s the best $10k I ever spent.

Second, I knew the company was going to grow like crazy and I had a partner, one of my closest friends, and I know deep down, if he listens to this podcast, he kicks himself every day that he took the money. I bought out his initial investment, which was $10k, and then I paid him back $40k. Not a bad return on money for a one-year investment, but I knew if I didn’t pay him $40k I was going to be paying him $400k.

That’s how you adapt. You look at the conditions ahead and you adjust to them. If I didn’t look for opportunities and if I had mismanaged money, I would never have built the multi-million dollar conglomerate it is today. It is an absolute juggernaut and it has funded other ventures and start-ups that I have.

So again, the seven deadly sins of a startup:

You need to be looking for opportunities. You just need to be highly alert in dangerous situations, as well as opportunistic situations that present themselves.