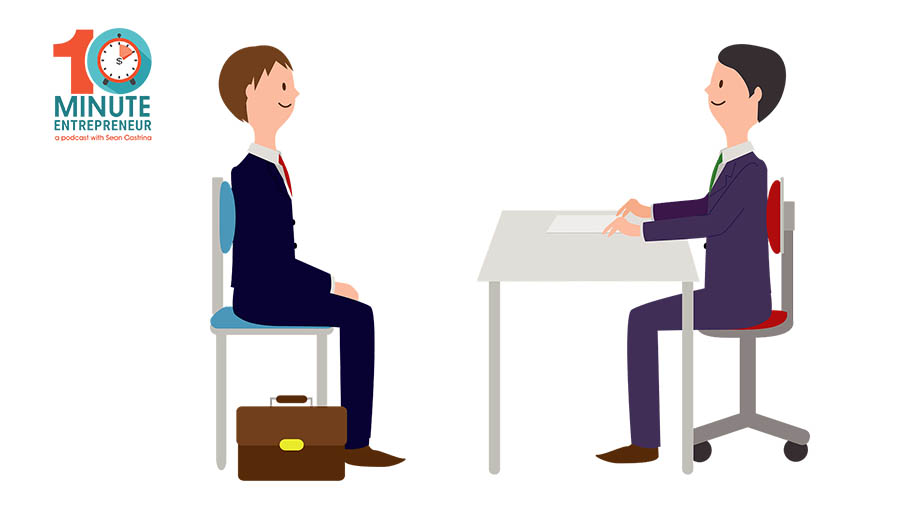 GET A JOB! This could be the solution to your problem! Having a job can solve a lot of problems and HELP you in your journey as an entrepreneur! Listen to today’s podcast to find out why!

I understand that, but there are positives in working, and I’m going to share that with you. I don’t think I would have been a great entrepreneur had I not worked first, because if not anything, it showed me what I didn’t want to do.

I remember when I worked early in my career. I got out of college and I worked on weekends with the gentleman painting houses. I hated it. The time went by so slowly and I’m getting paid by the hour. I knew then that I would never trade an hour for a dollar figure like that.

Right there was an epiphany. I would have only known that had I worked! So sometimes working can be the best thing you can do.

Let me share with you what you can learn from having a job that’s going to make you a great entrepreneur. Don’t just think you need to be an entrepreneur immediately. Maybe the best thing you can do is work for somebody for a year or two.

Here’s what you’ll learn by working a job.

The first thing you learn is responsibility. This just means you learn to be at work every day, on time, and you know how to fulfill the responsibility. You know what it’s like to work 52 weeks in a year for two years.

A lot of people just are not responsible enough to own a business. They can’t manage themselves. How in the world are going to manage anybody else? You learn responsibility when you have a job. You have a time you need to be at work, you have the responsibilities there that you need to take care of. I don’t care how simple of a job it is, everybody says, “Well, what am I going to learn working at McDonald’s?” There’s a lot. You can learn more anecdotal. You have to be at work at a certain time. You learn how to work within a team. Everything I’m going to teach you, you can learn working at a Chick-fil-A or McDonalds or anywhere else.

I mean, if you work in a McDonald’s, you have a key function and if you pull you out of the equation, something doesn’t get done. It runs like a clock. There’s Chick-fil-A which also runs likes a clock. I’m always amazed at these restaurants, fast food restaurants, where you have 16-year-olds to 80-year-olds working as a team. You can learn teamwork and I think that’s critical.

You can learn about the industry. If I’m coming out of college and I want to go into a business, I don’t think I would do a start-up right away. I would go into that industry to kind of get a better understanding of it.

My friend, who makes millions of dollars in roofing, came out of high school, started roofing, and then he started getting into the management and the service side of it. So in his early 20s, he knew it top to bottom, moved to our area, got a job at a roofing company, and then he developed a service company for them. They installed roofs, but he developed how they can make money in services and they didn’t partner with him. He offered to share revenue with them, they didn’t, and he went out and started his own. Now, it’s probably close to a $10 million roofing company. He knows one thing, roofing. He understands the industry from top to bottom. Does he put roofs on? No. Does he climb on roofs? No. The point is, he has a complete top to bottom understanding of an industry. That’s what you can do. If you get out of college, you can go work for a couple of years and understand the industry that you’re going into.

Why is that important? Because then you’re going to also learn the pain points of the industry. You’re going to learn what they are. Customers complaining, faults within the system of the business, internal pain points, things that you all are struggling to provide. You never see that if you were in the business.

You’ll get to see how somebody resolves the high-level conflict. You’re going to see how you handle customer service because it happens somewhere. Even if it’s with an employee, you’re going to learn the interaction that it takes to resolve conflict and you get that by working. That’s the problem. Sometimes people want to be an entrepreneur because they want to skip all the steps and they somehow think they’re going to avoid this. You’re not going to avoid it, you’re just going to get it without preparation.

So if you see your manager handle a high-level dispute and an employee or with a customer, you’re learning. If you start handling customer service, you’re learning. These are things that it would be best to be learned on somebody else’s dollar. They’re paying you to learn these things, preparing you for your start-up.

If you work within an industry, you’re going to see people that are super talented. I sold cars for a month because I made so much money, it was crazy. The manager that I worked for, I hired, and then his wife ended up being our lead secretary for about five years. He was the best salesman I had ever seen in my life. So I hired him as a salesman. When you get in the industry, you see the superstars. You start making your little lineup.

You get a network of understanding. People that you could go to for advice.

You see mistakes and you don’t have to pay for them. You see mistakes like how a company tried to try to scale their company and it failed. Maybe they went too fast. You see hiring mistakes they made. You get to see mistakes in front of you, and you get to go, “I would do it differently if I had it”. “That was actually something they did good”. You see things that they did that are good as well. This will save you money. It’s going to save you money. I always say, failure and mistakes are best learned through a second-hand story and a heck of a lot cheaper.

So this is going to save you money.

Sometimes we need to mature. I was at 19, I was not ready to start a business. Nobody would come work for me. So it gives you time to prepare.

These are good reasons to get a job.