Ep 258: What MOTIVATED Me to be an Entrepreneur 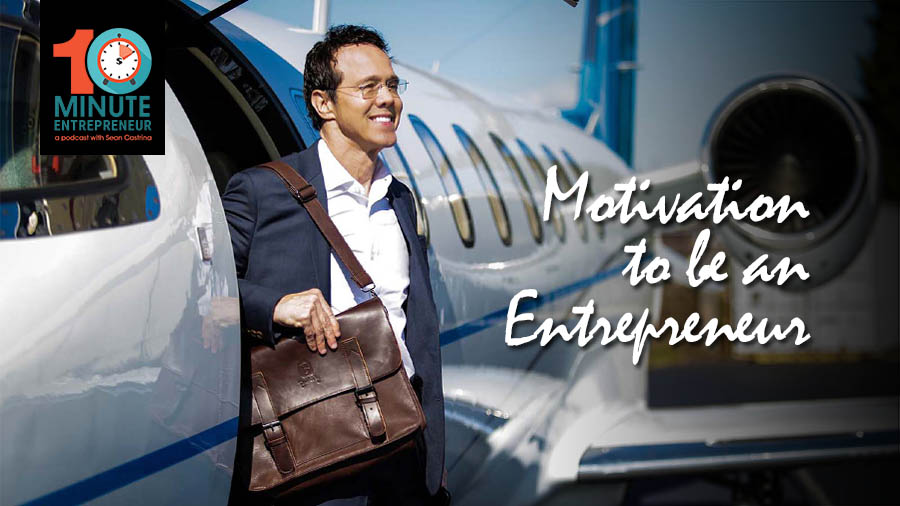 What made me want to be an entrepreneur?

My start-up journey is really simple. I had my dream job, lost my dream job, and realize that, man, I never wanted to be dependent on another person for my employment, my career, my finances, again. I thought being an employee actually was the least secure way to go through my adult life. I didn’t like being dependent on another person, having a boss you can’t stand and you don’t get along with, so I didn’t see that as a great recipe. It works for a lot of people, but it didn’t work for me.

So I want to share with you what motivated me to be a successful entrepreneur.

I like the idea that only half of the people make it in the first five years. I’ve heard that from two years to five years, but regardless, startups fail at an alarmingly high rate, and that was a challenge that I was up for.

I thought we did a few things really well that we could beat those odds. In over 25 years, we’ve crushed those odds, and that became the book, The 8 Unbreakable Rules for Business Success.

Control of My Career

I really wanted to dictate where I ended up as the CEO of a very profitable company. If you’re an employee, there’s no guarantee of how quickly you’re going to work your way up the ladder and whether you’re actually going to get positions based on your talent. If you work for a family-run company and the owner’s son is in the business, you may never get that position, so I really wanted to dictate and control my career, and I did not want to put that in the hands of other people.

I grew up poor. I’m not saying dirt poor, but I grew up poor enough to know that money is not everything, but it’s in the top five. I wanted to have the opportunity to make as much money as my energy, effort, talent, creativity would allow me to make.

I wanted to make money off of what I believe my talent was, and I believe that as an entrepreneur, the upside was much greater than if I was an employee where you get a 3% pay raise every year. I mean, think about that. That’s not enough for me. I like the idea of unlimited income potential.

I like schedule flexibility. I do pretty much what I want when I want from a scheduling standpoint. I never missed one of my kids’ school events ever. I’m home for dinner every night.

I like the fact that I can control my schedule and I worked a lot. But I kind of worked that over seven days. I always felt like I was doing something even on every day, even if on Sunday I was blueprinting my week and thinking on ideas and profit streams and whatever the case may be. My family would tell you, Sean, you’re always thinking about business. But you know what, when I’m at a T-ball game and I’m sitting there in a chair I’m thinking about business and I’m watching my son play. He doesn’t know that, you know. You can do two things at one time.

I’m never being told to do something I don’t want to do. I love the fact that in the beginning, you’re going to do everything.

I always say, there’s going to be manure out there and you’re going to be the one shoveling it in your start-up, but at some point, the pay-off is that you don’t do pretty much anything you don’t want to do, my schedule. There’s nothing on my schedule that I don’t really want to do, and if there is something, it’s quick. It’s a phone call I don’t want to make because nobody else can make it.

So I like the fact that I’m never told to do something that I don’t want to do, I don’t like getting ordered around actually. I think that doesn’t really work well with me.

Can’t Get Laid Off

I like the fact that I can never get laid off. Partners of mine that have all been let go of jobs they thought they’d have for 10 more years and they were either forced in the retirement, were downsized, or let go because they weren’t performing at a level that a new supervisor thought they should.

I mean, that makes up three of my business partners right now. The fourth one is because income potential had reached the ceiling. Man, I don’t want that.

So I can never be laid off or fired a case, and I joke with my staff on when we have a tough week, on a Friday, when I leave, I go, Listen, I’m very disappointed with myself, I am letting myself go today, you know, because I’m just not worth anything, and I’m hiring myself on Monday and giving myself a significant raise.

The point is, is that I don’t have to let myself go. I’m not firing me, I may be disappointed in me, but I don’t get let go because I had a bad week, a bad month, or a bad quarter, and that’s what happens as an employee. You have a bad quarter and they start looking to replace you and then you have that really awkward meeting where they put you on notice.

I did not want to make someone else rich. You’re either going to pursue your dreams, your dream, or you’re going to help someone else achieve theirs, and I really felt like from a talent standpoint, too.

I felt like I bring a lot to the table. I knew early on, I sold insurance for one year, I was making that guy rich, and he knew I was going to make him rich, and I was not going to spend my life making somebody else rich.

So if I’m going to take my energy, the ability to sell, the money is going to my pocket. I’m not going to make someone else rich.

What motivates? I wanted to build a great company that employees people. I mean, I love that challenge. I didn’t just want to start a company and survive and just make a little bit more money than I made when I was employed. I wanted to build a great company. I wanted the challenge of building a great company. Why? Because that employs people. Nothing gives me greater satisfaction than when the FedEx envelope envelopes come on Thursdays with my companies and all the paychecks that are in them. That is it. That is the highlight of my week. It still fires me up, because I built a great company, multiple great companies, and it’s provided tremendous income opportunities for other people, business partners of mine, as well as employees.