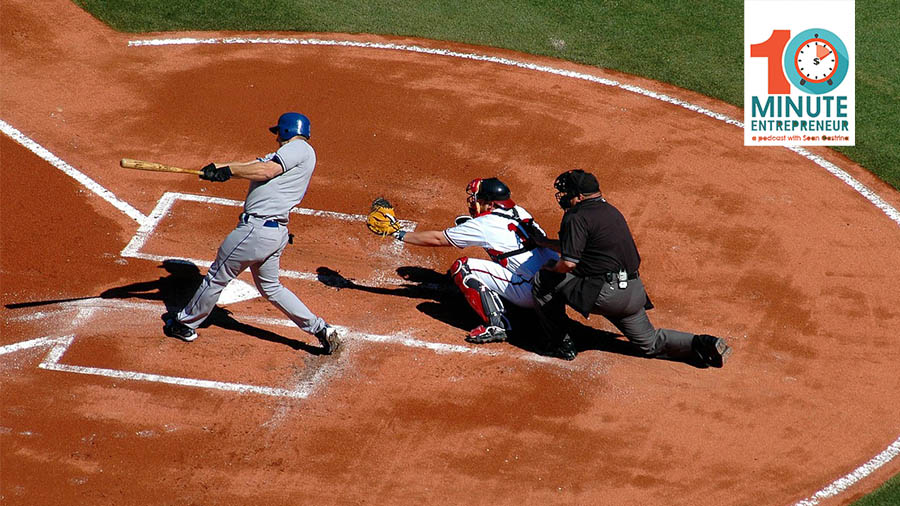 Learning from mistakes is crucial! Today we are talking about the foul balls that are important – NOT the home runs!

We always think we have to hit a home run. I get so many DMs on Instagram from people that want everything that happens so fast. And nobody is patient. I always say all my successes took 10 years.

It definitely took me at least five, but there were no overnight successes. I hit a lot of foul balls. Why do I talk about foul balls? Because when you’re playing baseball and you’re up at the plate, you don’t want to get struck out. In a perfect world, you’d like a home run. But the foul balls are the balls that could have struck you out that you just tipped off and they go into the stands or they go behind you. They dribble over here and they drive over there, but they keep you at the plate, so you get another swing at it.

I’ve realized looking back over my success, I haven’t hit a lot of home runs. I have fouled a lot of balls that have kept me in the game, and the game is life. The game is the success game and trying to become successful and be prosperous and be wealthy and build companies and everything that has to do with that

Let me just take you through my journey, just so you can be encouraged. No home runs, but a lot of tipped off balls.

I was born legally blind, that just means I can’t see shhhiii, my eyesight is so bad, and I’ve had everything done to that can be done. They installed contact lenses inside my eyes. It’s an implantable contact lens underneath your actual lens. I was in that case study. That just shows you how bad my eyes are. I’ve had LASIK surgery, but they could only do one of my eyes because my cornea is so thin. Just enough to pass my driving test. My friends won’t even let me drive a golf cart.

But the point is, is that eyesight was a challenge for me growing up. I couldn’t play baseball because I didn’t like a ball flying at me that fast that I really couldn’t see, but in gym class one day, there was wrestling. They lined everybody up and then you got the wrestle the person next, and if you won, you just kept moving down the line. I was a small person, but I moved down the line knocking off like eight people. I knew this was my thing, but I couldn’t see well at all. I end up taking up wrestling and it would pay my way to college.

Another tough foul ball. During my senior year, while getting recruited by all these colleges to wrestle, I played soccer. I tore my ACL, and back then it wasn’t like an easy surgery, so I got it drained, but I had to wrestle all year. How do you wrestle with no ACL? And because I had to lose weight, I ran five miles every day. So pictures this, no ACL, my leg was like jelly, but I would go on to be a State Champion.

I think I ended up being better because my defensive skills on my feet got a lot better. That’s how you make a negative into a positive and on top, you just never got away. Getting away from me was like trying to get away from a spider monkey.

So I get to college and I get hurt, and I show up my junior year three days late with no money and not signed up for classes. Now, that’s hitting a foul ball.

I go to where the president of the school’s office was, wait for him to come out to walk to his car. I know I have 10 seconds to get his attention. I got his attention for 10 seconds, told him I got hurt and asked if there were any other scholarships I could get. I got a work-study scholarship that paid my tuition for the final two years. That was a foul-tip. Most people wouldn’t have gone back to college, let alone go back three days later with no money signed up for no classes.

I’m in grad school and I have my dream job and I lose it, basically, overnight, because there’s a leadership change.

Time to hit a foul ball.

I would use that to inspire my entrepreneurial journey knowing that I never wanted to work for anybody again. I would start my first company and that would give me kind of an incubator for all my companies. I understood that the service companies didn’t require inventory. And every time somebody worked, you made money off of them, and you didn’t have to be the person working. So I lose my career job, but that ended up hurling me into entrepreneurship, which is now three books later and 20 companies and millions of millions of dollars. It worked out okay for me.

I’m on my entrepreneurial journey. I try to steer out of my lane. I don’t stay in my service company lane. I get a breaking pitch, greed hits me and I start a retail business. This business ends up going under at the time, I lose $50k in a year and a half of aggravation.$50k at this time was a lot of money to me, but I lost it.

Now, I could let this do me under. But you know, I started looking into UVA grad school for business. I was like thinking, maybe I would go get an MBA and maybe that would help me with business and these mistakes wouldn’t happen.

That was going to cost me $150k going through this business. The disaster cost me$50k. I just looked at it differently, I changed the paradigm. I took an MBA in real-life business, real-life crisis management, and I literally wrote down everything you could ever learn from that lesson. I’m telling you, I’ve made that money back 20 times over. every mistake I made with that business going under has made me money since.

Then there’s the 2008 real estate market crash. I have a signature for a five-house development and every one of these houses is going to be $1M dollars and above. It’s where my neighborhood is now, it’s where I personally live. But I owned all the other lots and the market crashes and the person that I’m going to partner with ends up going under. He ends up going bankrupt. I’ve gotta negotiate out of a multi-million dollar agreement. That’s a foul ball. I live to survive.

I lost a business partner. They came in one day and said, “Hey, I’m done, I’m retiring.” It was during a downturn in the market, never saw it coming. It was awful. This was a person I had lunch with every day. Not only was he a great business partner but someone I just genuinely like. I still talk to that person, he’s still a friend, but boy that hurt. That was a foul ball. I could have quit. I could have given up that company at the time, maybe sold it, but I fouled it off because I wanted to stay at the plate again. That’s made me millions of dollars sticking around staying at the plate again, and now I own 100% of the company.

Then I went through a trademark battle with a competitor of mine who was trying to use my name and likeness of one of my businesses, and that was for two years. It was draining, but I survived, I took that one. It’s funny, we both had big-time attorneys, and something told me to call them on the phone. I told him we were basically going to war on Monday. I called him on Thursday, and I’ll never forget. I said, “Listen, I think we should go to lunch tomorrow, because if not, Monday is going to be a very expensive day”. He actually went to lunch with me. I gave him a deal. I flipped over the menu and I brought one of my business partners with me as a witness and we literally wrote the deal on the back of the menu to save both of us a ton of money. Steve Jobs and Bill Gates did something like that when Microsoft gave Apple $100M I know there was 100 million. Between two competitors, I fouled the ball off and took something bad and made it something good.

Then I hurt my back and I wake up years later and realize I’m addicted to pain medication. I didn’t know I was because, heck, my doctor gave him to me. How could I be addicted to something when my doctor gave them to me? My doctor got arrested!

Yeah, you look on the news, you see your doctor get marched out in handcuffs. Reputable office, you know? He’s gone, and then I tried to get the prescription refilled. Well, people don’t like prescribing 20 oxycodone pills a day, let alone 75 milligrams of fentanyl. Yeah, I was on both. Didn’t realize it, you know, I had been losing weight and things of that nature, but hey, I had pain and this was my doctor prescribed me. No doctor in my town would re-prescribe it and they told me, you need to go into rehab!

It was tough because they’re telling it to a reputable person. I’m mature. I’m on TV. How can I be a drug addict?

I’m an entrepreneur, I’m a millionaire!

Well, I had to foul off a few balls. My buddies from college, people that love me and care about me, we went off to North Carolina, rented a beach house, turned it into our own rehab. I left eight days later cold turkey on both of them. Never did them again. Foul tip! I could have used that as an excuse to lose, but I made it something good! I survived. My pain doctor now says, “I’ve never seen anybody cold-turkey the meds you were on. We call that a prisoner of war mentality. Never!”

I just want you to know, I’m not making this stuff up. I fouled off a lot of balls.

This is my point, learn to fall off balls! You don’t take a strike, but not everything’s going to be a home run. I just wanted to reveal some personal stuff today. I think everybody thinks they have to hit a home run, and I look back at my life and I just hit a lot of foul balls. I stayed at the plate for an extra 15 pitches, and then I put one back in play.