Ep 264: 8 Best Pieces of Advice if NOT Going to College 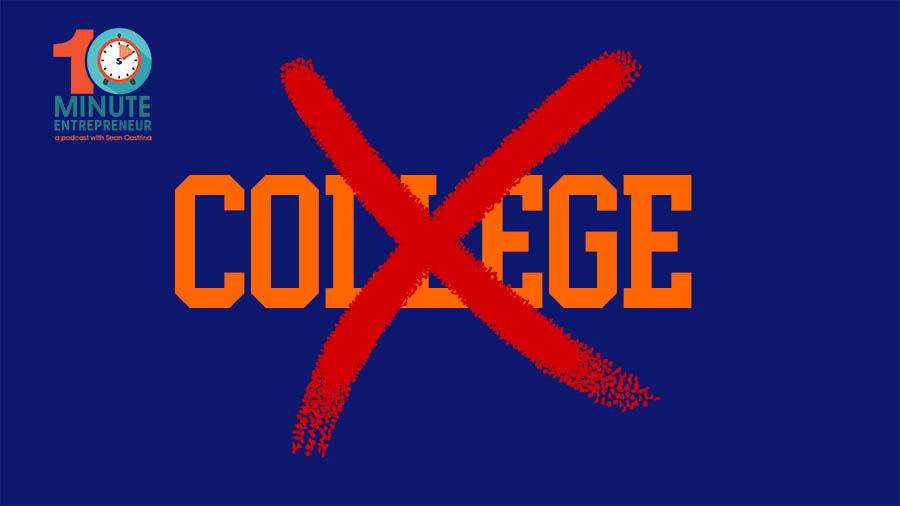 Today I am sharing the 8 Best Pieces of Advice if you or your child is NOT Going to College! Parents this podcast is VERY important for you to hear!

This is my eight best pieces of advice for those not going to college. My son did not want to go to college. A great athlete, but he wanted to be an entrepreneur. I went to undergrad and graduate school and his sister went to college.

So this was kind of new for us. I’d tell you where I really noticed it was like a senior night when everybody has these incredible fake biographies of what their kid’s going to do.

My son was a captain of the team, MVP, like Hall of Fame in that sport with parents that are pretty well known and affluent, so this was going to be a night where we would say, Oh, my son’s going to do A, B, C, D…

My son said, “No, not going to college. I’m going to be an entrepreneur. Like my dad. That’s it. I’m good with that.”

So you need to accept that.

You’re Getting a Head Start

The first thing is you need to accept that you don’t have to go to college, that you’re actually getting a head start on real life. You’re kind of getting a head start. You’re not in those four years, which is often babysitting. It’s almost like a placemat for your life; you don’t know what you’re going to do, so you go to college and go into debt.

This Is a Great Time to Find Your Proficiency

What’s that? That’s your passion and your strength. It’s a merger of the two. I’m passionate about golf. It doesn’t mean I can make a living doing it. Doesn’t mean it’s a good idea for a business. So your proficiency, this is your passion. This is something that you know when you’re doing it, it’s effortless. You’re consumed by it. I’m consumed by business, not just any one type of industry. I understand that it might be an industry you’re fascinated with or a cause, like global warming, whatever the case may be. You need to kind of find your area of giftedness, and it’s the merger of these two that creates a proficiency. I’ll give you a simple sentence for it, it’s what you’re good enough at that people will pay you to do. The sooner you figure that out, the better, and you got four years to do this.

Focus on Being Great at One Thing

They’re great at one thing.

Make Yourself a Great Employee

Oh, Sean, you mean I have to work? Yes, get a job for crying out loud!

There are so many things you can learn by getting a job.

What do you want to be known for? You should own your domain with your name on it. You should start cultivating your brand. You need to be aware that in this economy that you are basically a freelancer. You can work anywhere in the world today from your house nearly in so many professions. So you need to cultivate the brand. What is your resume? If I want to hire you, I look at your resume and one thing jumps off the page, this person is known for this…that’s your brand.

Start building your personal brand. It should be something that’s genuine and authentic about you.

No one said success happens overnight.

Everyone thinks they’re going to be rich at 20, according to my Instagram messages I get. Everybody’s like, I want to be successful now. Great, I want to be 6 foot 2, but I’m not. It’s a lot of things I want, but they’re not real. Everything I have has taken on average three years at a minimum to just kinda get it going, and then around eight years for it to reach its full potential.

I’ve never had overnight success. There needs to be a little bit of patience.

Find a Great Idea And Move on It

Then there’s a desire. That’s the next level. So let me use the parallel. I want transportation. You buy a Kia, but desire is like a BMW. This is where you kinda satisfy somebody’s really deep desire.

You Can Entertain People

My son’s got me watching shows where you the guy does nothing but eat wings with people. It’s an incredible show. Other people that just do crazy stupid things. If you can get an audience, you have a business.

Journal Your Ideas and Move on One of These

You’re never going to be ready. You just need to move on one of these and for what it’s worth, it’s typically the second startup that succeeds, not the first one. In all my interviews, rarely have I met with somebody where the first startup is the one that we’re actually talking about, but they always share with me it’s what they learned in the first start-up that didn’t quite succeed at the level they wanted to, that prepared them for the company they currently have.

Start looking for good ideas that you take action on because even if it fails, it’s going to lead to something good.

It’s going to happen. Because you’re so afraid of failure, it’s going to hold you back from doing something, but let me give you quick advice on number eight: Fail fast.

Let’s just get it out of the way. Fail fast

Fail forward. Learn something in that failure.

Fail cheaply. You don’t have to go all-in on that start-up. You can do it like it’s a micro-business as a beta test,

The earlier the better. Learn. Learn something from it. Not every failure has to be expensive.

These are the eight best piece of advice I have for those that are not going to go to college.