Ep 270: 5 Ways to Come Up with a Profitable Business Idea 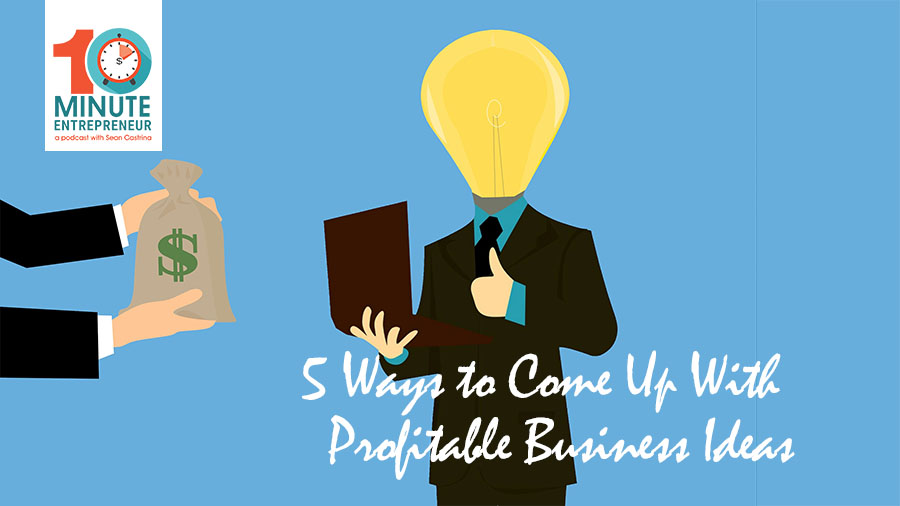 Today we are talking about the 5 Ways to Come Up with a Profitable Business Idea!

To Solve a Problem

Let’s look at maybe commercials you’ve heard lately. I hear them all the time, like how to get out of a timeshare.

There’s a commercial where a man shares how he sold time shares. I actually think it’s one of the best commercials I’ve ever heard.He basically comes to the conclusion that he’s going to die and go to hell if he continues selling time shares, so he reaches back out to people that he had sold time shares to, and then he gets them out of the time share. He gives the illustration of going against the court and doing that. It’s incredible because I know people that have bought time shares and he’s just saying, “Hey listen, if you’re in a time share, you’re getting ripped off, I can get you out of them”. That’s how to solve a problem.

There’s endless products on helping you sleep from snoring products to MyPillow, to incredible mattresses. If you have tax issues, there’s endless companies to talk about getting you if you have more than $10k in back taxes. You solve a problem

I’m working on one right now for platform building. This is just a business that’s really around in my head. I’ve hired many people to help me with my platform, but there’s been no one company that does all these things for authors. I always say there’s a lot of items on the buffet bar, but there’s no chef in this space, that can take you from top to bottom and put together your platform. So that’s a problem that I’m personally experiencing and have experience with, and I see a business there in solving that problem.

To Meet a Need

I started a business because I wanted to have my car detailed while I was in my meetings on Monday. It seemed like a good time to do it. I needed to have a clean car because I was in sales, so I started an auto detailing company. This was over 25 years ago and made maybe $35k a year in passive income. The business still exists.

Babysitting, that’s a simple business. You have a senior care businesses. It meets a need. Getting your gutters clean. That’s a need. Delivering simple groceries. That’s a need. You can start a company that hangs up Christmas lights. That’s a need. I don’t want to climb two stories and hang lights up nor do I want to take them down. There are endless needs. GrubHub solved the problem and met a need in that I don’t want to go drive to a restaurant and pick up my food. The need is, you need food. It also allowed restaurants to offer delivery that didn’t have that capability before.

To Meet a Desire

Meeting a need is a simple grocery list. You go to the grocery store, you get what you need to get your milk, your bread, whatever the case may be. If you’ve ever shopped at Whole Foods, that’s a desire. That’s a whole different level of grocery shopping. Don’t tell me that’s just regular grocery shopping, because I went there. I bought a $14 salad once for a dinner party. It was a whole new level of grocery shopping. It’s a great business model, but it’s the next tier up. It’s not just meeting a need. it’s satisfying an image that you have, it’s satisfying a nutritional concept that you have, that you want everything organic. It’s the next tier up.

Let’s look at transporation. Cars are transportation. Then you have Mercedes and BMW. This is the next level up. This is status. This is a desire.

Sandals vacation. I want to have a romantic vacation in the most beautiful places in the world, and there’s no kids there. The next tier up.

I mean, the Kardashians prove this to be true. If you can create an audience, you can sell a product and/or monetize your image.

If you can get people to follow you, there’s money to be made there, and we’ve seen that over the last 15 years. We see it happen every day.

My son has me watching a show where a gentleman eats hot wings with people, and it’s hysterical. You just watch these people literally melt as the wings get hotter. It is a hysterical, extraordinarily simple concept, but I never would have thought of it. But this person did, and it’s a great show. There’s just a simple camera there, a table, a plate of wings, and this person interviews somebody, but the heat of these wings getting hotter and hotter. The guest gets more funny, whether they even realize it or not, because it’s almost like they’re under the influence of drugs or alcohol. They get silly. They get stupid. It’s funny and it’s a great show. And that’s entertaining, and it makes money.

If you can entertain, you can get a following, and then you can monetize that. Shaq hasn’t played basketball in a long time, but I sure do see him on a lot of commercials.

He’s leveraged that with his position in Papa John’s with his image, his likeness. He’s got so many products. The General Insurance. Why? Because he has a following. He is an image associated with him. It’s a positive brand, and people will pay for it. Look at Tiger and LeBron. They play sports, but everything outside of that comes from their ability to entertain through their athleticism. They get eyeballs for TV commercials. I did a podcast how Tiger Woods made me a millionaire because I think it’s the best return on advertising money that you can do.

You Already Have a Business

I’m going to give you another secret that a lot of you probably have never thought of, but if you have a job today, you have a business. You just don’t realize it. What do you mean by that?

I mean, think about it. If a company is willing to pay you to do something, then you have value. I don’t even care if it’s opening the door.

They are saying, “well, I think you’re worth $8 opening the door. So the fact is you could start a company opening doors because somebody believes you’re good at it. Maybe the going rate is $8, but maybe you can get somebody to pay you to do it for $15 if you do it at awkward hours. You could probably hire somebody to do it for $8 and there’s a $7 margin there. I’m going really fast through this, but if you have a job, you have a skill. Somebody has agreed to pay you for doing something. If you’re a school teacher, you have a tutoring business.

If you’re a nurse, you could clearly create a nursing business where you extract from the formality of a hospital. Let’s say you create a business where you bring on two nurses and they work for youand the margin is there. Typically you can charge $45, pay somebody $35, and there’s a 10 split.

Mowing grass. You’re working for a landscaping company. Truthfully, you could mow grass without the company and start your own business.

So start looking at yourself as a business. I’m talking from the day you start working, if you can become great at somethingwithin any organization, within any company, that could eventually be a business, but be great at it. Be so good they can’t afford to lose you and then split off, and then you can train other people to do what you did.