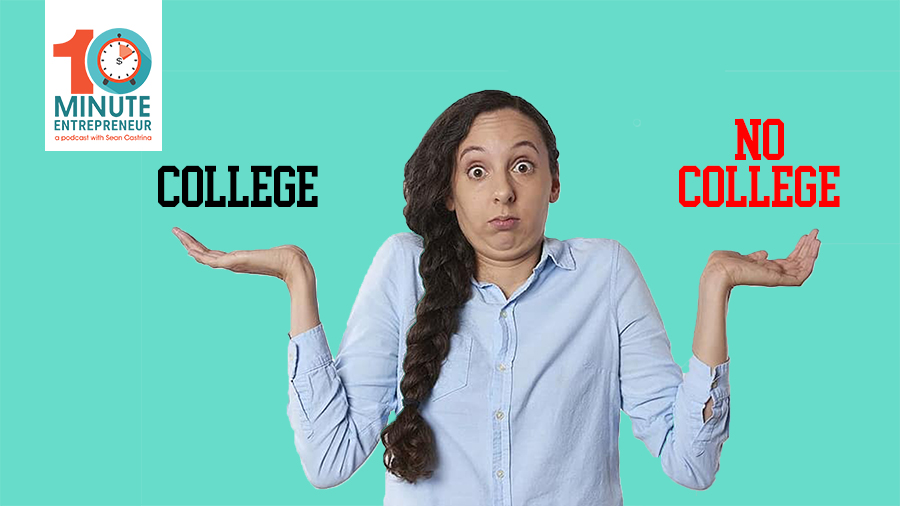 Today we are talking about When to Go to College and NOT to Go!

I get this question a lot about, “Should I go to college? Should I not go to college?” So I’m going to give you my exhaustive opinion on that today.

When to Go to College

I want to start off with I have a daughter who’s a teacher. She went to college. I have a son who’s an entrepreneur who just graduated this past May, and we did not send him to college. I personally went to college, so you could kind of see where I’d be leaning, but I don’t think college is the right answer for a lot of people. I think you might want to try something else. But let me tell you where I think it applies. You go to college when you have a clear understanding of what it is you want to do for a living AND there’s the caveat. It requires a degree.

My business partner is an engineer. He evaluates foundations and all that. I’m glad he went to school, because if you build something and the foundation doesn’t hold up, bad things can happen. So engineers, yes, they should have a degree. Doctors, lawyers, there are certain careers that a degree absolutely makes sense for because they can provide an education that does give you what you need for that profession.

When Not to Go to College

1. When you have no idea what you want to do.

Take a break. Just take a break to figure it out.

This will not be popular, but let’s say you’re not really quite sure. Would four years in the military ruin your life? They have a great scholarship program. You get an incredible deal on houses. My dad was in the military and he still gets benefits. So there’s tremendous advantages.

I was a college athlete, and I found that students that went in the Marines first they were extraordinarily tough. They were more mature. So that’s not a bad idea. Or go to the Peace Corps.

2. When there’s another way to acheive what you want to do

Maybe there’s another avenue other than college to achieve what it is you want to do, like Human Resources. Go work for a company, try to work in their human resource department and learn it. That is not rocket science. You can learn it. You can absolutely learn HR. I’ve had people work in my companies in HR. None of them went to college for it. Have good people skills. Be very organized. There you go.

Business, I didn’t go to college for business. I definitely don’t think it’s required, and looking back at a lot of pretty smart people, Bill Gates, Steve Jobs did not go back to college, nor did Mark Zuckerberg to learn how to run their billion dollar businesses.

Entertainment, obviously, there’s actors who did not go to college. We don’t complain that LeBron or Tiger Woods didn’t finish college.

Were in the trades. I would tell you that if you can do something you currently have a skill that can pay your bills and you love doing it, then you can call it a day. You don’t have to necessarily go to college. I have people that work for me within the trades and make $100k a year. when LeBron did not want to go to high school, nobody approached him with the idea that he wouldn’t be able to pay his bills. It’s worked out okay for him.

How I Approached Business with My Son

But I’m going to jump right into business now. I’m going to share with you how we approached it with my son and everything I did.

First thing I did going into his senior year was I met his guidance counselor was like, “What does he need to graduate? Just to crawl across the goal line?” My son’s like a B student, played three sports, super athlete. I always thought he would go to college, but once we started realizing this may not be the avenue, we minimized his high school degree. Why? His senior year, he did an internship with one of my digital marketing companies and it was incredibly helpful. An internship is a great way to learn business other than going to college.

The next thing I did was I signed him up for an improv class. That’s one of those comedy classes where you kind of learned how to communicate and act out things that you have no idea what’s coming, I did that to kind of get him out of his shell a little bit, and to get him to be able to communicate around people he doesn’t know. I think it’s really helpful. I got him doing sales. He started moving into sales in his internship.

The ability to communicate is very important. I just had heard Buffet say this in a recent YouTube, he believes it’s 50% of success. He was telling students, “you may be in grad school, but your ability to communicate and or write an idea, to convey your thoughts, to be able to communicate your ideas, that is an absolute must skill”, so I wanted my son to have that. So we did the improv class again, we did an internship reading books. He has a book shelf within my book shelf of all the books he’s read. He’s read The Wealthy Gardner. He’s read Zig Ziglar on selling. He has read The 10X Rule, Rich Dad, Poor Dad.

He’s taken online classes in the area that he’s excited about, which is platform building and social media and all that. Allegedly, I’ve been told he’s big on tiktok. I know he was like a half million followers.

Next, I hired him a mentor, somebody within this social media space that was very well known to work with him.

And then finally, we launched a business. He and his best launched a business. You can look it up, it’s called Podcast Squad. You’ll see a photo of like the logo is two people, that was kind of like my idea going in. I kind of walked into the studio one day where they were working and it looked like “Men in Black” and we just kind of work from there. It’s fun to be involved in maybe 1% of the success and mentor them a little bit on it, but they’re running with it. It’s a profitable company already. I would tell you within three months, he’ll be making more money than a school teacher. Absolutely sure of it. Within two years, he’ll be making more money than the county administrator. There’s no doubt in my mind.