Ep 275: 7 Things I Wish I Knew Before Starting My Business 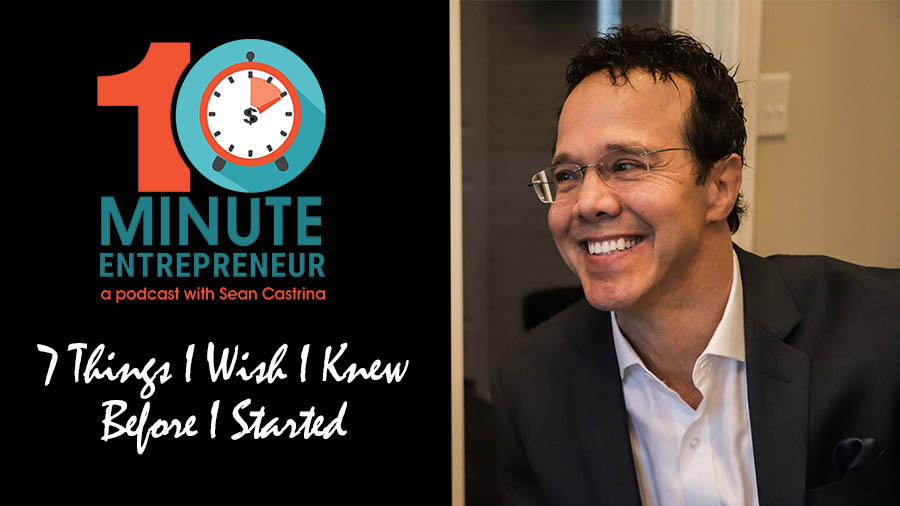 Today we are talking about the 7 Things I Wish I Knew Before Starting My Business!

I’m gonna talk to you today about The Seven Things I Wish I Knew Before I Started My First Business.

If you listen to the podcast, you’ll notice I always ask my founding entrepreneur two critical questions that I try to extract from them.

First thing is, I want to know what they wish they had known when they first got started that they know now, and then what’s the one or two pieces of start-up advice they like to give new founders because the two tend to be different.

Let me share with you the seven things I wish I would have known.

Your Ideas May Change

The first thing is my original idea will change more than I ever imagined. I start with this idea, this is what I think my business will look like, but it morphs into so many things I never imagined.

When I look at one of the companies I have today it’s basically eight companies in one. I never imagined that when I started. It was just a very small service company. I’m just smart enough to give it a name that could cover something broad, and I gave it a tag line that gave it room for expansion. I teach you all that when I tell you to buy how to pick a name. Never pick a name that confines you, so it allowed for tremendous growth, but I have to be frank with you. I never saw it morphing into what it has become, where we bring in $100k a week. In my original business plan, I saw bringing in $100k for the year. So it’s 50 times bigger than I ever imagined.

So your original idea will change, and I tell you that because you need to expect it to change, and I talk about that when we discuss how to create your business plan. I tell you your business plan needs to be active. It’s kind of like a Google document that you can constantly change. It’s not a finite like 10 Commandments written in stone type of thing. It’s an evolving idea.

Get Started and Make Changes as Needed

I think I was waiting always for the perfect time, and I put things off and I’ve learned you just have to get started. It was General Patton who said,

You need to get started. Stop putting off your launch. You’re never gonna get everything perfect.
When the Mustang got launched, it wasn’t much sooner than the Chevy Camaro. It was like within a year, and the Camaro has never caught up as that affordable sports car that families can have. That extra car. It was just so different back then. You had station wagons and cars were very utilitarian, and then came the Mustang, and the Camaro has never caught up with it.

Apple has launched their products and they’re evolving constantly. I mean, every two years, there’s a newer version, so clearly they don’t produce perfect, they produce “pretty darn close”. Companies have actually learned how to make this very profitable for them. So get started now and make changes as you need to.

I’ve bet too much on business ideas early on that ended up not being as good as I thought they were. In the age of the internet and how you can survey anything, you can do social media surveys, you can do something on Instagram, you can get feedback pretty easily right now. I just think that you need to start your business on a micro-scale. That’s why I tell you not to quit your job because you can get proof of concept while you’re still working. Do you have a business that you can attract customers who are interested in what you’re offering and they’re willing to pay your price?

Typically, if you’re gonna offer like a course, you know, one thing that they’ll tell you to do is evolve it. Pre-sell it and find what people are most interested in. I think pre-selling is a great way to do something. Trying to create interest is a far greater problem to solve than having to scale quickly. I can deal with the second problem, so now I always test things.

I remember I wanted the office to look perfect and I wanted an extra computer, because I thought that would be a great idea. And I wanted THE sign to be perfect and… forget all that. Forget all that. I do think you should look professional, and I’m not telling you to not look professional, but we know there are times when we just been way too much money on stuff that doesn’t matter.

I remember a restaurant that opened up and I was eating there with my family and the waitress is all excited, telling us how the restaurant had given them gym memberships and all this stuff, and I remember looking at my family and I go, “they’ll be out of business”. They were out within a year. That was foolish money.

Customers are your greatest source of helpful information. Create a feedback loop from day one. It can be painful, but it is helpful. I just can’t think of anybody’s input that’s more valuable than a customer, whether that’s a target customer where you’re trying to get information on a launch, or it’s a customer that now you have.

There are two ways of receiving it. One is the person you think is going to be your target customer. Be an FBI profiler. Who is most likely to buy from you? Survey their needs, build a product, and or service around their needs. Number two is when you start servicing your customers. Get a feedback loop going. We’ve done survey cards, prepaid postcards with four questions, etc. We give away Starbucks gift cards coffee. Yeah, we pay $5 to get their feedback for every single customer we serve. It’s incredible, it’s unbelievable, valuable, and it creates good accountability.

What am I talking about? We tend to hire average people just fill needs and gaps rather than someone that’s going to move the needle. Either you need to hire an MVP here, or you need to partner with somebody.

You can hire somebody great and that can evolve into a partnership. You can offer a partnership in your employment agreement. I think maybe the one thing that I learned early on, and I didn’t know it right away, is staffing is absolutely critical. It was actually the people that I didn’t pay a lot of money to or didn’t have high expectations for and you felt like you got them on the cheap that were the ones that were the wasted hire. It’s the hires that I made when I had to stretch the budget and I had to stretch my acceptance that I was bringing on somebody that was going to challenge me, that became partners of mine.

The ability to see talent quickly is something that I have, but this is something that you need to do. This is one of mine that I learned early, but I didn’t know it right away. Like anybody, I try to hire people and save money.

Make great hires and make that one hire that when you make that, it knocks over all the other dominoes or it’s going to get you somewhere further and faster than you can yourself.

It Will Be Harder than You Think

I’m glad I didn’t know how hard it was going to be. Because now it’s funny. Like, I’ll see a business that’s kind of a competitor. And they startup, and I say to my staff, let’s see if they’re really in it. Let’s see how long they last.

See, I know how hard it is. I know it’s easy the first 90 days when you have the enthusiasm and new advertising and you’re the new kid on the block, but I always say, let’s see if they’re around a year from now.

In my business, massive major competitors have not survived in our marketplace. It’s a very tough market where I’m located, and you better bring a big checkbook, because if you think you’re coming here, you better go get a bazooka and some machine guns. Maybe a tank. Sometimes it’s not as easy as they think. And I learned that too.