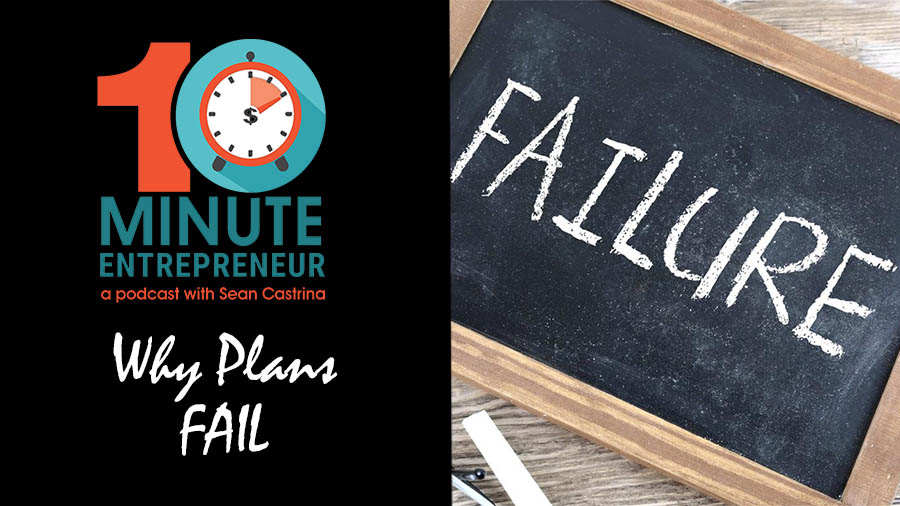 Today we are talking about Why Plans Fail!

You’re a business owner. You’re an entrepreneur. You’re constantly putting a plan together to achieve something, and sometimes it doesn’t work out. I’m going to tell you why these strategies and plans that you put together don’t work.

You have this idea. Why can’t you get it to the end?

The Idea is Bad

Number one is, your idea is bad from the beginning.

I hear people say they’re working 100 hours a week. That’s great, but if the finish line is in a different direction than you’re running, you can run as fast as you want, it doesn’t mean you’re going to get to it. So the reason why your plan may be failing is that your idea to the very core of what it is you’re trying to achieve is bad. It’s just not a good idea to start with. Or you’re not the person who can do it…

Sometimes the idea is bad. Sometimes it’s the person.

We all have limitations. If you’re a five right now on my leadership scale, five out of 10, guess what? You have the ability to maybe take an average project and get it to the goal line. But if you have a high-level project, it involves all these different pieces, and you’re not there yet. You need to back off and find a strategy or initiative that fits where you’re currently at. What I could achieve at 22 is not what I could achieve at 42. Why? I’m grown. My skill set has grown. My talent level has grown. My resources have grown.

Your Team is Limited

The team you have is just not very good. I like what Jack Welch says: “The team with the best players wins.”

So your company has is this big initiative or plan and you believe you’re the one that can bring it to reality, but the team’s not talented enough.

Do you know what I’ve learned? A big goal with a bad team is a nightmare.

The Strategy is Bad

Why do plans fail? Because it was a bad strategy to start with.

In the first Iraq War, we absolutely LIT them up like the 4th of July night after night. Then we never entered Baghdad. We went home, we humiliated them, we clearly showed that they needed to stop. We got them out of Kuwait. That was the goal, to retake the Kuwaiti oil fields. We achieved our objective. Well, why the second time? Did it not work? I think the strategy was bad. It was based on a failed premise from the beginning

My point is, is that you can have a bad strategy with a great team and still fail. See, this is where I’m comparing the two wars. You could have great generals the second time around like General David Petraeus, but you still have a bad strategy. The plan from the beginning was a failure.

It was never achievable. It could never be measured, and what does that cause? Eighteen years of hanging out in the same country. It’s too endless. There’s no definition of a finish line.

So, why do plans fail?