Ep 290: Getting Cheap Customers to Buy From You 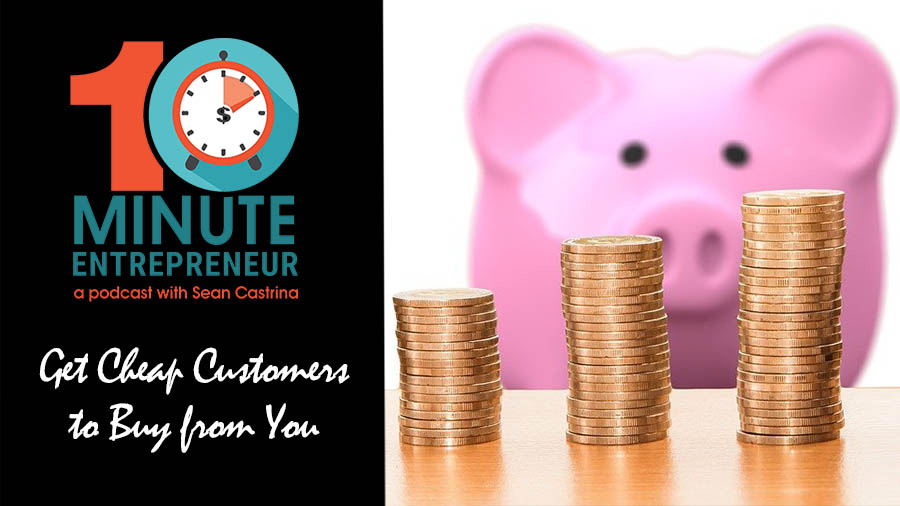 Today we are talking about how to get your customers for cheap and how to get them to buy from you!

But broke means you can’t do a darn thing for them. Broke can’t afford it, even if they wanted to. Broke is a whole different customer base.

How do we attract and get cheap customers to buy for months? Well, the first thing you need to do is make sure you don’t have a broke buyer. So point number one is cheap and broke are two different people, and you need to know that. So are you attracting broke people? These are people that no matter how excited you got them, they could not afford to buy it. That’s not the customer. We want cheap.

You have to look at cheap differently. Cheap means they are frugal. I live in a very wealthy area, and we sell very high-end services, and so going in, we know that our buyer is frugal in many cases, even though they’re wealthy. Even though on the outside, everything looks like, “Wow, this is a perfect customer”, we understand they are frugal.

Frugal, again, means I value my money, I don’t just give it away, I put a little thought into it. Show me why you’re going to take my money from me. Where else could I put this money? Who else could I give this money to? Do you deserve my money?

You need to look at cheap and frugal differently.

Show Them the Value in What You are Selling

So now we have a frugal buyer in front of us. Show them why your offering brings value to them. Why is it worth it for them to buy? Now you have to make that leap to the frugal person, who just has to be educated about your product and your service that they’re unaware of and that they need and why they need to be excited.

People buy because they want to buy. People do not want to be sold. They like to buy, so you have to find that little link there in the language that they’re looking for.

Frugal buyers start with a no, and then you have to just bridge them. You have to show them what you have is quality and it’s worth it. It’s simply worth it. You’re going to pay me A and my product is worth A and a half, okay? So there’s quality there.

What I’m selling is unique. You just can’t get this anywhere. That’s why you need to buy it from me, today.

Well, how do you reveal the problem? You ask questions and find out what the problem is. If you don’t know what the problem is, you’re not going to sell them. Anyway, that’s selling techniques. We’re not talking about that necessarily today, but you have to solve their problem.

Does What You Have, Meet Their Need?

Either you have to solve a problem or you meet a need. That’s going to be 75% of every sale. We don’t mind cheap because you don’t have a cheap person. You have a frugal buyer who just needs to be educated. The frugal buyer just needs to be encouraged. An emotion needs to be stimulated that’s strong enough to make them part with their money and give it to you. It just takes a little bit more work, but once you get them, they’re lifelong customers.

You have this frugal person, and the big question they have in their mind is why is it worth me giving you what you’re asking? Why am I going to give you my money?

And I’m just going through five quick ones.

So we understand now that our customers are not necessarily cheaper customers but they’re frugal. So what do you need to start doing? You have to stop attracting the DYO people, and it’s called a lot of different things, but it’s the do-it-your-own people.

In the service business, this is a trap. A lot of times they’re talking to you to figure out how to do what they’re going to do themselves anyway, and so all you are is just a free source of information. I own service companies in the home improvement industry. Sometimes, the homeowner wants to do it themselves and they just want to meet with us to get information on how they’re going to do it themselves. We don’t consult for free, that’s why when the person reaches out to us, we qualify them; “How soon are you looking to do this project, what is your budget for this project?”.

So one thing you need to look at if you’re a service provider is are you attracting the DYO people. It’s the wrong person.

Find the Emotion Causing Them to Hold On to Their Money

When I have money in my pocket, it gives me some degree of security. That’s an emotion. When I look at my bank account that it creates an emotion. You need to trump that emotion. If you do that, they’ll spend it. What will typically overcome the emotion of somebody frugal is ego. It’s why wealthy people with money will buy that Mercedes or BMW, because of ego. Ego will trump frugality. Safety will trump frugality. Family will trump that. If they have a partner, you trigger that person’s emotion. Sometimes you have to play the emotions off each other.

That’s where you’re talking to the gentleman, let’s say. And you know he’s frugal, he’s tight, but you have the wife or the partner and you know that they want it, and you say, John, if Suzie thought this purchase made sense, would you buy today? You just take him right out of the equation. I appreciate how you think, John but I’d like to know if Suzie, your loving partner here wanted it, would you buy. It’s just playing. All you’re doing is you’re playing a little bit of a game here. You’re trying to create an emotion that’s greater than being frugal, and this emotion is: I don’t want my partner thinking I’m cheap.

Again, what I’m talking about today is, Don’t worry about cheap customers. Don’t attract broke. Let’s get rid of those two. And then we understand that we have a frugal customer in front of us, and frugal customers are saying, Give me a reason to buy. I shared with you, if you give them a reason to buy, they will buy. And they will continue to buy from you. So the bonus on this is attract the customer that is most likely to want and pay for what you’re selling. We get trapped when we attract the wrong people.