Ep 292: How to Choose a PROFITABLE Business Idea 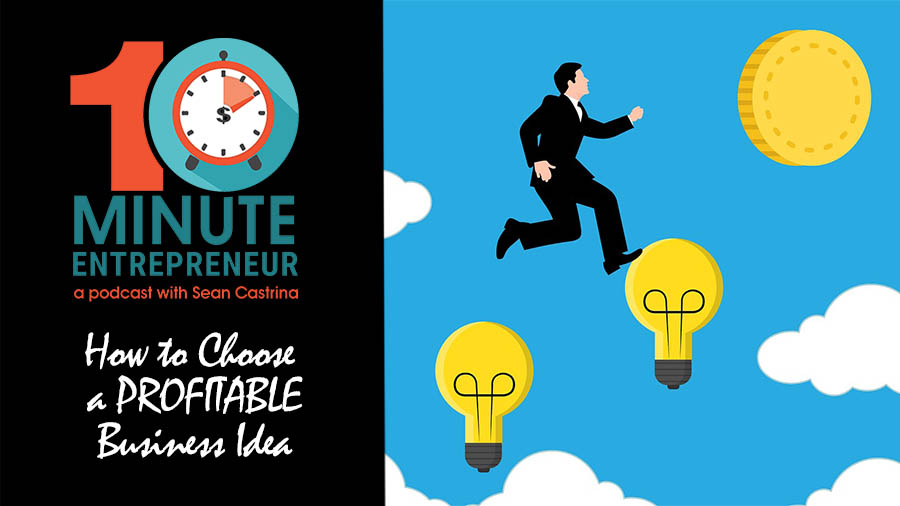 Today we are talking about “How to Chose a PROFITABLE Business Idea!”

I’m into motivation, but motivation without education is worthless. I can get you excited, but if you run in the wrong direction, it really doesn’t matter. I want to get you running in the right direction. I’m want to kind of steer you around the obstacles of how to start, grow a business, and how to be more successful. What we’re gonna talk about today is choosing between two potentially good ideas.

I have to choose between good and great.

Leadership is choosing between a good idea and great ideas. Leaders have the ability to focus on the one that has the biggest payoff. In the example of Steve Jobs, he shelved hundreds of projects to focus on the iPod and the technology that evolved from that such as the screen technology that led to everything else such as the iPad and the iPhone, but he focused on what he believed at the time. The iPod had the greatest pay-off.

So I want to help you to choose between multiple business ideas.

Listen, business ideas inside my head, they all sound great. They do. They’re all genius… and then what happens is I expose them to one of my business partners, somebody with who I value their ideas. I value their criticism and their input on my ideas. And they go, “Sean, did you think about this?” Wow, that idea is not quite as good as I thought now. Let’s get into how we choose between multiple business ideas.

Which One Would You Bet Your Life on to Succeed?

It’s a bit strong, sure. Well, my feeling is if you bet your life on it, it’s probably gonna narrow down your ideas.

I find this with young people. You have tons of ideas, and that’s great. I joke that I’m an idea machine as well, but if you had three ideas to choose from, which one would you relentlessly focus on? The most successful people focus on one. If you wouldnt’ bet your life on any of them, which one would be the closest? When you bet your life on that vetting process, that’s extreme, but it allows you to just quickly get rid of a couple of ideas that you don’t believe have a high probability.

Which Has the Lowest Cost of Entry?

This is what I like! I like A low cost of entry. Let’s say there’s a business opportunity that I can do for $10k. Well, if it fails, I can try multiples of those, and I know statistically that one in two ideas tend to fail anyway in the startup world.

I’ve come across this before. I own a construction company with eight divisions. I was considering launching another division that I believe could have been lucrative. And then I found out one piece of machinery we needed was a quarter of a million dollars. I felt it would take like five years to get my return on that one piece of machinery. Sometimes, that machine breaks and you have to have a back-up. I saw the cost of entry and it left my comfort zone.

My comfort zone is usually $25k or less, and that’s for my first three months of my initial start-up. I find that I can take that loss without being aggravated too much. I don’t like losing anything, but I’ve taken three of those types of businesses under $25k and turned them into million dollar companies, so if I could take $25k and turn it into a million, I like that. I don’t like spending a quarter of a million to make a million. You can see why the cost of entry is important, so I look at the lowest cost of entry.

Now, this is important. I also consider what the payout would be. If I could put up, let’s say a quarter of a million and my payoff could be $25 million and more, I may reconsider that, but for all you that are considering your first start-up, look at the cost of entry. You might have to vet a couple of ideas side by side. You might have to do a little bit of due diligence on all of these, because if you don’t know the cost of entry on the other ideas, you can’t make this decision. That’s why I’m a big fan of a business plan and that’s why I wrote the book, the World’s Greatest Business Plan

Which One Can Be Systematized the Easiest?

The businesses that I invest in and launch, I look at if I can systematize. Can I create a very simple business model, attract customers, service customers, make them happy, and rinse and repeat?

So can you systematize it easier?

Which One Has the Largest Payoff?

I kind of teased into this a little bit, but which one has the largest pay-off? I’m kind of a blue-collar business guy who likes to make the most in the shortest period of time. Again, if I put up a quarter of a million dollars, maybe I can make 10 million, but it’s gonna take me 10 to 15 years to do it. See, I know everything over two years is a dream, so I am really consumed by making money fast. I have tried in every single startup I’ve ever had to make money on day number one and absolutely be generating a profit by day thirty.

Listen, I’ve done it. That’s the kind of start-ups I want. I want a pay off in the shortest period of time. If it takes me two years to make any money, then I’ve lost money for two years and I have to make up all the lost revenue for the first two years.

I didn’t come up with the Uber idea, I didn’t come up with GrubHub. If you came up with those ideas, disregard everything I’m saying. But assuming you have the 99.999% of all of the other business ideas out there, because the Uber and Grubhub ideas, they’re incredible, but they’re few, and the ability to execute on them is exceptionally difficult.

Which One of These Has the Most Staying Power?

Which one’s the most durable? When Warren Buffett is investing, he wants durable companies. Durable means what they’re selling now, they will be selling 10 years from now. No, nobody can see the future…Markets change. But in essence, you’re looking for durability. You’re not looking for something trendy. Warren Buffett doesn’t invest in trends.

He invests in things that are gonna be around forever, like underwear, ice cream, insurance, Coca-Cola, Financial Services. But he looks for durable companies.

When I’m launching a business, I’m saying to myself, is there going to be a demand for this 10 years from now based on what the data in front of me? Based on what I know, based on all my due diligence, does this business have staying power? And that’s a durable business model. That’s what I want.