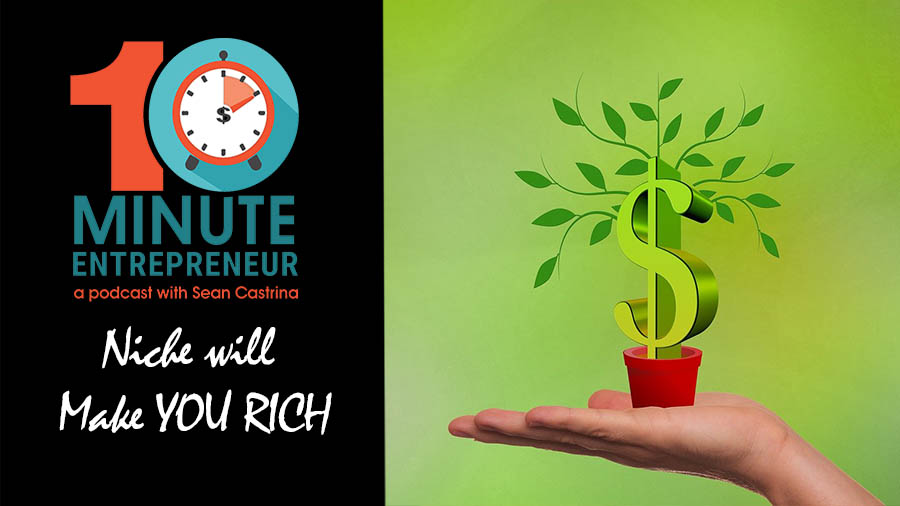 Having a NICHE will make YOU RICH!

What we’re talking about is a niche can make you rich.

A niche is like when you take a big industry or a big market, and you cut it down to a very finite piece of it. For example, that would be like UNTUCKit Shirts.

We all know there’s a lot of different shirts that you can have, but they’ve chosen to sell a shirt that is untucked. When I go on their website, they’re trying to sell me suit jackets, t-shirts and everything else. Well, why? Because that’s a limited shirt. It’s a specific style. And styles go out of style. That’s the whole thing about clothing, is that people want to change their style of clothing. Colors change, suit styles change, ties get thicker and thinner. So UNTUCKit became vulnerable, and they know that. That’s why they’re expanding and trying to get into other things. I think it’s going to be a challenge. Why is that? Because I think their name. It’s a great name be all you do is sellUNTUCKit, but if I was that, I would probably have started another company with a different name and used some of the profits to do that. You know to attract that target customer, so you know that system will go after them.

The next example is Altar’d State. I think they do an incredible job because you couldn’t have a more narrowed niche. It’s a store for females, faith-based. There’s Christian music playing in the background. Could you eliminate more people than that? And by the way, their stuff’s not cheap at all, but how are they pulling that off?

Well, they’re creating a culture. They want you to feel like you’re in a small group study where music’s playing in the background. I’m surprised somebody doesn’t offer you a coffee while you’re there. They have a certain style. They have incredible quality. They have a great shopping experience. Altar’d State is pulling it off because they know they have a target customer, and they create an atmosphere where you don’t want to leave their store. I just went there like a week ago, and I couldn’t get out of there for under $200, One thing was better than the next, and this went with this and this one with that. It was stuff you don’t see anywhere else. They have a great culture, they have a unique style, their stuff is high quality, and they give you this experience, you got the music playing in the background, it works. But you gotta be careful because the market could be too small.

I think Peloton is figuring this out and they’re doing it well. Peloton, as a company, was the bike. And now they realize, no, that’s not it. It’s not the bike, actually.

Who’s the target customer? Home fitness enthusiasts. Everybody’s fighting for that person right now. So it’s not just a bike now. It’s fitness classes, it’s yoga, it’s rowing. The one company sells the mirror where you can work out in front of the mirror. It’s a huge market.

You gotta be careful about niching something. Focus on who your target customer is. You don’t want to niche to the point where you’re trying to attract a one-eyed-leprechaun. Unless it’s a high-margin product, it’s hard to make a lot of money there because they’re just so hard to attract and there’s limited room for growth.

I love bitching, but this is what I would do specifically if I was a small business owner. Let’s say that you have a niche and reverse engineer what has made it work for you.

Let’s duplicate it. Put it under a different company name and launch a secondary company and expand your market. That way, if it fails your brand doesn’t take a hit.

An example of this is the guy who started Massage Envy. Perfect Model. Basically, you have a membership, so you can regularly get a massage. Then he reused that model with chiropractic services, but he didn’t run it under the Massage Envy name even though it’s the same target customer, same business concept. A completely separate name. If for some reason it fails, it’s no hit to the major brand. If it succeeds, you got a company you can sell-off.

So what I would tell small business owners is, if you got something that works, start with the niche. There’s nothing wrong with that. But make sure you unique. Make sure you offer something dramatically different. What makes Lululemon and Altar’d State and the ones that do it really well is they’ve created a Peloton. They have a culture. Peloton is a lifestyle. It’s a high-quality piece of equipment. They create this experience when you ride on the Peloton and you have the instructors talking to you, and they always have an incredible English accent and everybody’s attractive. You want to be like them. You’re part of this wonderfully fit community. That’s the secret to doing it.

Make sure that you can attract lots of customers. The problem with a niche, it’s like finding that one-eyed-leprechaun. Sometimes there’s just no room for growth. One of the biggest criteria I use when I start a business is, What is my growth opportunity? Sometimes, there’s no growth opportunity.