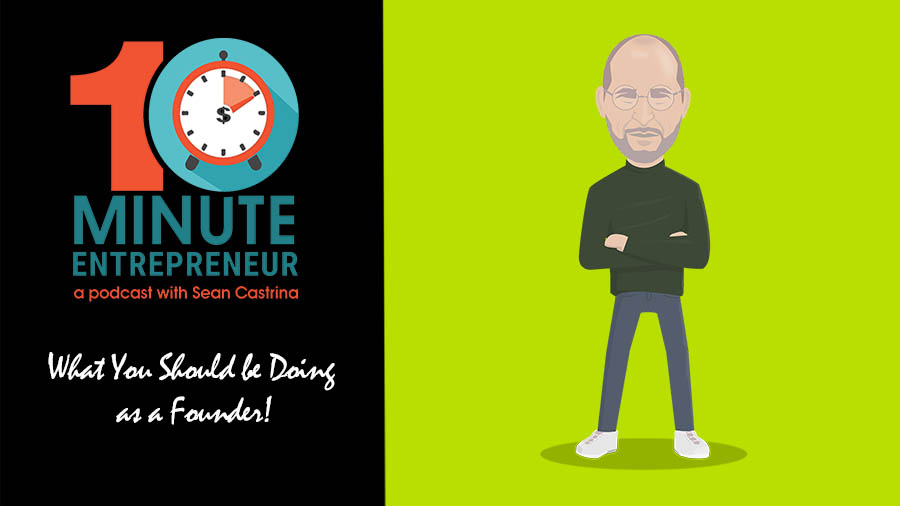 Have you ever thought about your roles as a founder? Today we are talking about what you should be doing as a founder!

I want to share with you what your responsibility should be as a founder.

I think we get caught up doing things that we have no business doing. You don’t work IN your business…You work ON your business if you’re a founder. At some point, Bill Gates stopped doing programming and worked on the deal with Xerox that launched the company and made Microsoft is what it is today.

I’m going to share with you 10 things that you need to put your time and focus on, and then I’m going to do podcasts on each of these as I can.

The Founder Has the Vision

If you don’t have the vision, nobody else will. Well, in all my companies now, if I’m a co-founder from conception, I share the vision. In my digital marketing company, I would actually think that my co-founder may have had a better vision than I ever had.

I have an idea of what I’d like it to do as a business owner and how I would like our digital marketing company to service small businesses, but the founder and or the co-founders have the vision. It’s not our employees. Where do you see your company two years from now, five years from now, ten years from now? You’ve got to set that vision. In every one of my companies, I have a vision of what I want them to look like and where I see them.

I have that vision and in the beginning, it consumes me. It’s so vivid. I remember when I started my direct mail magazine, I was sitting at a convention for the magazine company after being in the business for three months. I started in September and they had a big national event in December. My vision at the time was I wanted to survive being in business one year from then. I had a very vision. Then, I wanted to be massive and ended up in 23 cities.

Now, I know from the beginning to have a big vision. I remember when I first started, I had a very tiny vision, I’m embarrassed to admit. My vision was survival. Now, I never have a vision that small, but I did then.

The Founder Guards the Brand

You should as a founder, ferociously guard your brand, your company’s reputation, and image likeness.

I’ve shared in a podcast where I had a competitor try to mimic our likeness. The keyword in our companies is the word advantage, and they took that word and started tying it to their company…It was just deceptive.

You know, when you go into a dry cleaner and the lady says to me, “Oh, I see you opened up another location”, and I say no, I didn’t. Their phone number was just like ours. They were mirroring our brand, and I had to hire a lawyer and it was a knock-down-drag-out fight.

When I hire people, I gotta share with them our brand image, so it’s very important to us. This is the image and the experience we want customers to have. I ferociously guard the brand.

I sign off on all the TV, radio, digital marketing, etc. Anything that represents our company. There’s an image that I want. One of my companies, if I pull into the parking lot and it doesn’t look pristine, I’m not happy. I’ll walk around and pick stuff up as well, but we have an image that I want us to have. I know the power of a brand and how much money that brand has made me.

The big decision is the should versus could.

I just want to focus on that. These are the ones that move the needle.

Let me give you an example of that. Facebook owns Instagram, Google owns YouTube. Now, these make sense. These were great acquisitions. These are acquisitions that make tremendous sense. Amazon bought Zappos. That made sense. Amazon launched Audible. That makes sense. Apple was offered the opportunity to buy Tesla. You might look at what Tesla is worth and say, “Oh, Apple made a huge mistake”. No, no, they didn’t.

So as a founder, you’re going to make the big decision between should and could. I get opportunities for my companies and I have to look at should verses could. I had one very recently. I could have expanded up into the Northern Virginia area with someone because we have a very established brand in a system on how we do things, but I don’t want to get trapped up in Northern Virginia. I don’t want to create something like start a fire that I gotta keep fanning. What if for some reason I lost a partner out there? It’d be near impossible to replace him. See, I know all those things now, so I’m best able to consider the should versus could.

Blockbuster could’ve bought Netflix for $50 million and it should have.

The Founder Confirms the Big Objectives

You’ll set these for your company early on. I work with my partners to establish what these targets are and whether I can help them create a better target, and then I’ll review their strategy. I want to hear the strategy and I want to be involved in that. If you have a billion-dollar company, maybe you’re not involved in this but the majority of companies are 499 employees or less.

I don’t want anybody setting objectives that I haven’t approved because it may fulfill the vision that I want, it may conflict with the brand, or it’s something we shouldn’t do.

If you’re a founder, you need to be involved in the big objectives that people are setting, and then you should be involved in at least approving the strategy.

The Founder Approves and Provides Resources

You authorize the resources, the training, and the budget needed to achieve these set objectives, and that’s why you have to be involved in it.

These are five critical roles the founder plays. In the next podcast, I will tell you the next five, which are even more amazing, but they all fit together.