Ep 326: How I got Jeff Bezos and Warren Buffett to Mentor Me 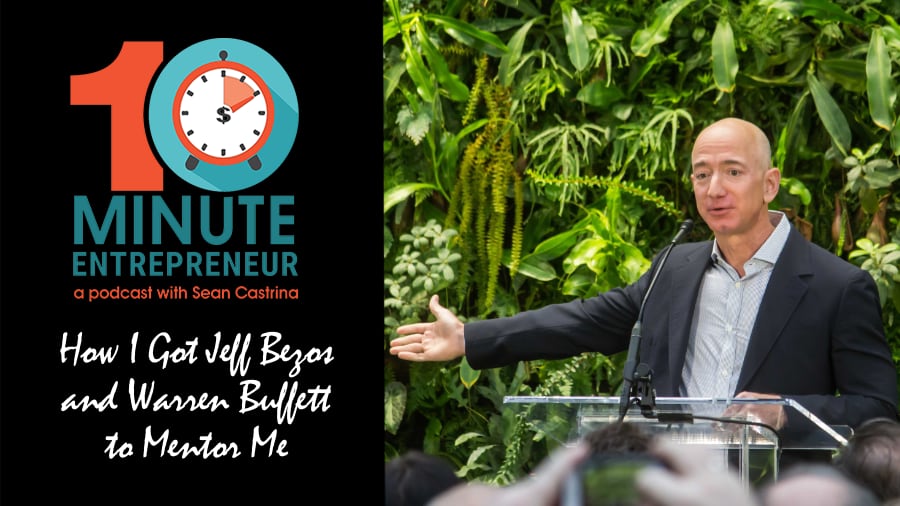 Wouldn’t it be great to have the best in the world be your mentors? Today we are going over “How I got Jeff Bezos and Warren Buffett to Mentor Me!”

I want to tell you how I got Jeff Bezos and Warren Buffett to mentor me.

I know you’re going, How in the world are they mentoring you? How did you pull that off?

Let me go back and look at this for a second and kind of break it down. What does mentoring mean? It means someone who trains or guide you. It says nothing about it being in person and even them knowing that they’re doing it! See, you can be mentored from the greatest, most iconic, most accomplished people in the world, and you may never meet them.

So I want to just talk about two people that are mentoring me, and I have a lot of them.

Sean, how is Jeff Bezos mentoring you?!

I’m not even sure if he’s written a book, all you have to do is go on YouTube and you can look at so many of his talks and interviews. You can get so much information and that trains you guides you, so you can get mentored.

I’m just going to go through a couple of things that I’ve learned from each of them that is incredible or a game changer that has helped me.

Jeff Bezos introduced me to the term, customer dissatisfaction.

See, I’ve always said that customers are not always right, and he kind of takes it into…customers are just naturally dissatisfied. They’re just meant to try to find something that probably could be better or sometimes they don’t even know why they don’t like it, but there’s always this underlying customer dissatisfaction. And if you know that, then you know you have to constantly be ahead of them on what it is they’re going to want.

That’s all based on customer dissatisfaction and that has been critical to mentoring me. As a CEO, I’ve always been aware of the customers who were a challenge, but now I understand that yeah, there’s a dissatisfaction that customers have, and you need to constantly be innovating to stay ahead of them.

I learned that from Jeff Bezos. We didn’t sit down, have coffee together, but I heard the talk. I’ve heard him say it multiple times, so that principle is embedded in my head.

Htalks about constantly taking risks, taking one risk after another, though never betting the farm. But he’s constantly taking some bets on new technology and things that he thinks customers will want. And his logic is that he only needs one of them to pay off. Audible, Kindle, Amazon Prime, Alexa.

You’ve gotta constantly be making bets and if you do that, then you don’t have to make the big bet at the end to try to save your company. If you’re constantly betting on new innovation, on new ideas, it only takes one of those to succeed.

He says he’s had a few billion dollar bad ideas, but a few he went all in when it was a company initiative. They worked out pretty well.

Apple did this as well with Steve Jobs focusing on the iPod at the time.

There were over 350 projects, give or take, that Apple were working on, and he just commandeered that one. He passionately took over and got involved in that. That screen technology would lead to the iPad, the iPhone, etc.

Maybe if Blockbuster just would have done some things like moving some of their movies online, no late fees, people just bring it back when they bring it back and we’ll just bill you for t

I love this quote because I’ve always believed it:

All overnight successes take about 10 years.

I thought that, but now he’s confirmed it. So an iconic founder and one of the wealthiest people to breathe oxygen agrees with me that overnight success takes about 10 years.

Everybody thinks it’s going to happen over night and before this social media age of overnight success I never thought that was possible. I mean, you may win the lottery, but statistically, they end up going bankrupt. I think it’s like 80% of lottery winners end up losing that money because they don’t have the skills and knowledge to protect money, and that’s a critical thing. The key is protecting money.

So all overnight success to take about 10 years. Thank you, Jeff, I appreciate that.

How Can you get mentored by Warren Buffet? Just read the notes of the Berkshire Hathaway annual meaning that they have in Omaha all the time. All his shareholders come, like thirty-thousand people, and they get to ask him questions. You can study countless interviews he’s done.

I buy into this next principal. I have a profile of employee that I like just as he does: smart, high energy, with great integrity. Buffett says, if they don’t have great integrity, the other two don’t matter.

As I’ve said, smart people can do multiple people’s jobs. You can’t hide stupid and you can’t put them anywhere. So smart people are always a great hire. Number two is high energy people, why? They can do the work of two people.

I’ve been a business partner with somebody with no integrity, and they had high energy and they were smart, and it didn’t make a difference.

So Warren Buffet taught me to create my employ profile, and there’s some things that I like that are different than what he likes. I like all of those, but there’s some other qualities that I like. I like people with great capacity and I like hungry, hungry people.

He also taught me to read endlessly. He spends about 80% of his day reading. I can’t spend that much time, but now I see the value in reading. His partner, Charlie Munger, says I’ve never met anybody wildly successful that it wasn’t a various voracious reader.

And then finally, he partnered.

He partnered with Charlie Munger about 20 years after founding one of the most iconic investment companies in Birkshire Hathaway. Now, I think he was worth at the time, about 70 billion in the 1970s, then he brought Charlie Munger on as a partner.

Think about that. tThat has confirmed everything I’ve always believed in partnering. You partner with the one person who can bring tremendous value. I like one plus one equals done, but find that one person which without them, you will never get to the finish line.

He brought someone that he believed he could analyze companies faster than anybody on the planet, and he still says that nobody can read a company report and analyze it better than Charlie Munger. It’s amazing because Charlie Munger is 96 years old right now. But think about that. Partnering 20 years after starting the company.

Like Warren Buffet, I don’t invest in things they don’t understand. I have a profile person that we like in our organization, I read as much as I can, and I partner with people who can help me get to the finish line.