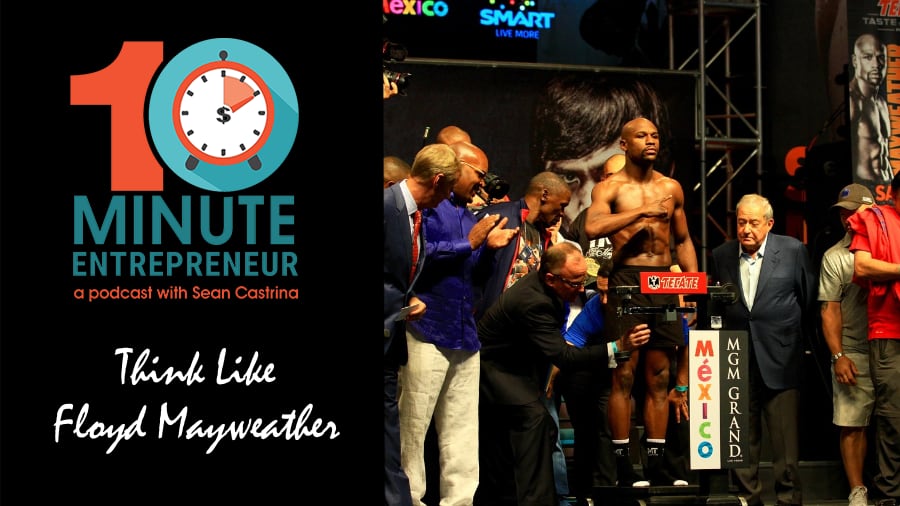 If you are a CEO, you need to think like Floyd “Money” Mayweather!

I watched the Floyd Mayweather fight last Saturday night, and I learned some things from it. There’s something he said in an interview that I think every CEO should learn.

He’s obviously worth a gazillion dollars, and he’s got so many ventures going on. The media asked him what’s the number one thing he needs to be doing. What’s next? He says, the ultimate goal is to find the next Floyd. Mayweather thinks about that.

If you’re a CEO, what you need to do is you need to find the next you. Or maybe not the next you, but maybe it’s a level of talent you need. You’ve gotta be a talent scout, and that’s what Floyd understands. He understands that his lifespan of being able to entertain people is limited and he’s milked it for everything it’s worth. But he understands the big job now is to find the next one, because nobody’s going to know what it looks like better than him.  He could’ve said something about building something in real estate, or the got 30 million just for somebody to put something on his boxing trunks. He’s definitely figured out how to monetize himself as and athlete but his goal is to find the next Floy Mayweather.

That’s how you, as a business owners, CEO, start-up founder, needs to think.

See, my business can only go so far if I’m the only one leading it. My businesses can do so much better because there’s about seven of me within my company. I’m not saying they’re all me, but they’re equally talented, just in different areas.

The general idea is it doesn’t have to be an absolute copy of me, but you have to be able to recruit, attract talent, and if you cannot do that, you will not scale. I use this all the time when I talk about Mark Zuckerberg recruiting Sharon Sandberg. I mean, that was the ultimate snag. He gets her from Google. I’m telling you that the Facebook that we know today would not be what it is without her. Why? Because Mark understood he had not quite figured out how to actually make money with this unbelievable thing that he created. At some point, you actually gotta make money in a business.

My advice to you today is take out a note card and write down what three positions in your company that if you had them, would be game changers.

Stop just filling holes. Plant some seeds for 20 years in the future. Find somebody who can make you money for the next 20 years.