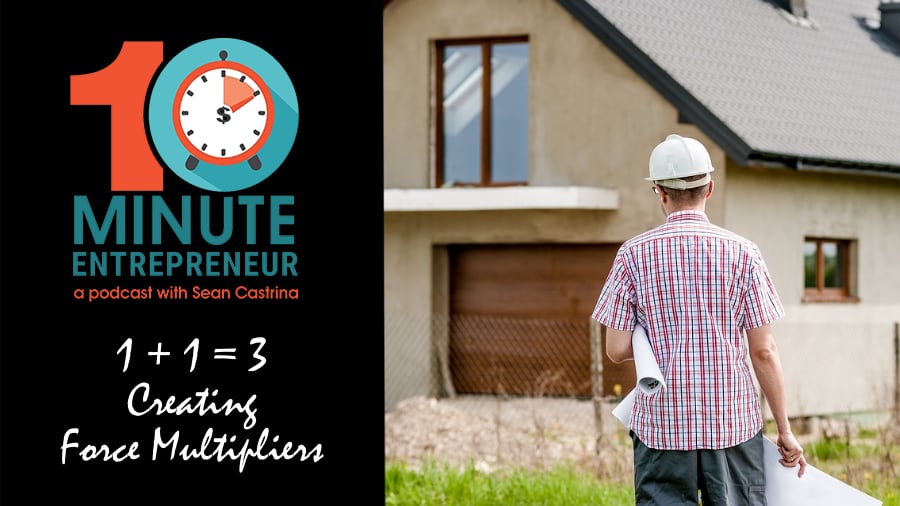 If you’re getting one plus one equals two all the time, you’re not going to make it as an entrepreneur because you’ve gotta figure out how to create force multipliers.

This is where you get the effect of three with only two. That’s what they try to do in the military. They try to figure out combinations where they can get the greatest result and the highest impact. That’s called a force multiplier. It’s when a combination of multiple things creates an exponential result.

I say one plus one equal three. What or who can you add to whatever you’re doing and get an exponential better result? You can get more productivity, greater profit, get something done faster, or save money.

I’m going to share it with you five ways that you can achieve this. I’ve used every one of them in some form or fashion.

The first thing is that I use helpers and assistance. I have assistants in my office me that work just two hours, a couple of days a week, and they do nothing but thank you letters. I like handwritten envelopes, people are more likely to open them. If I gave this job to my lead assistant, she would go nuts. Her day is busy enough as it is. What I do is I take a core person and I pair them with an assistant and/or a helper to do things that they don’t want to do.

I’m putting in a lower level person in cost and in experience, but I’m getting an exponential return because I’m freeing up my high dollar person to stay in their strike zone.

When my lead guy goes to a job, it’s already demoed at the end, he gets to leave a couple of days early because I have a person who can clean up and do little things on the job. My most expensive person who generate me the most amount of money is at that site less, and I have somebody with a much less cost to me.

We’re always scheduling appointments in our office, and I had a couple of cancellations last week. We have an app that reminds customers of cancellations. We’ve always called and we still try to do that, but we enacted an app for this now.

We still will call, but now we send the emails. My digital marketing company does all this fancy stuff all the time, being on the opposite end the spectrum. We can use many different tools to make things faster.

We have machinery where somebody can dig a hole a lot faster than a couple of humans. You could climb on a ladder and cut tree branches, or you can use a crane.

My point is, is that you can be so frugal that you do things slow where you could have machinery technology and apps create this force multiplier that I’m talking about.

I ask my staff all the time if there is a piece of machinery that can make this job faster. If you can produce things faster, you generate more money

In this hiring market, there are certain gaps that we’re really having a hard time filling. I’m using contractors that do my kind of business, but I contract them and pay them enough to where they’re willing to work under me for a brief period of time on a specialized project.

Perhaps you don’t have either the money to hire right now, or maybe you don’t need this specific position all the time, but there are certain times where if you had this person, if would create this force multiplier I’m talking about.

Mixing and Matching the Players

Some combinations are very toxic. I had to go to a job site the other day, because I had two employees ready to fist fight. Listen to the podcast for the full story.

I don’t expect you to be jolly-friendly and pating everybody in back, but I need you to soften the elbows enough to where I can put one other person in the sandbox with you. If I can’t put anybody with you, you dramatically eliminate what I can do with you…code for…you may not have a job. I know the value of mixing and matching certain players at certain times within our industry to create amazing force multipliers.

I know in our digital marketing company, hiring interns and developing them to full-time positions is incredible. It takes off stress off of our CEO and he loves training people and it’s a great mix, imagine.

Some people work four ten-hour days. Some people need to come in later or leave earlier. I don’t care if you work from a hot air balloon as long as you get the job done.

Tell me what is the best shift for you. I have people that want to come to work at 8:30am. They want to make sure their kids got on the school bus and if you ask them to come in an hour earlier it’s a disaster, because they’re getting a phone call in the way because somebody left the lunch box or whatever it is. Maybe it’s a single parent and they need to get off a little bit earlier.

What I’m telling you is, give it to them, but then challenge them in the workload. It’s more than what they were thinking, but you gave them a little bit of that flexibility. You’ll allow them to create a work day where they maybe they have the most energy, the most focus, whatever the case may be, but you can be creative with the scheduling to create force multipliers.