Ep: 360 One Thing Makes the Difference 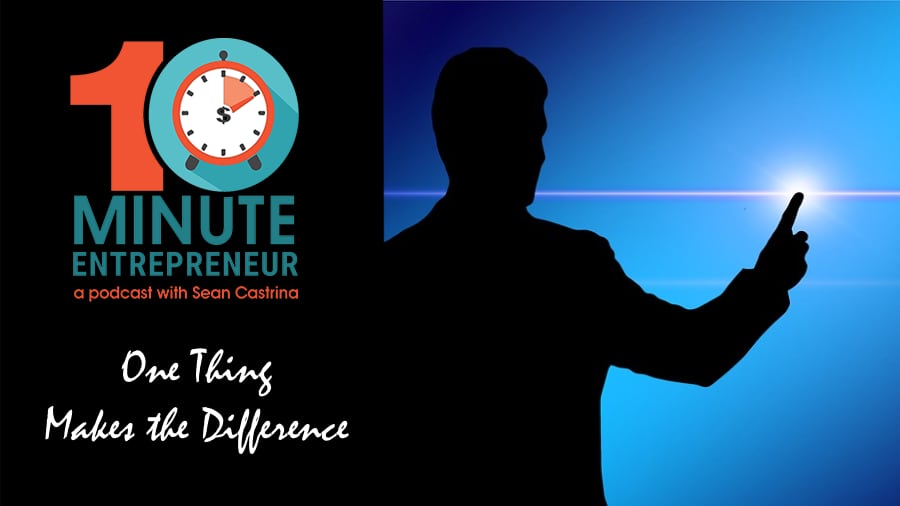 Find the one measurable that changes everything this year.

What I want to talk about today is the one measurable that changes everything. I’m really big on making things very simple.

This year it would be: we want to set up a new business in a new city. That’s where my number one focus is and it is the goal I want to hold myself accountable to. Within the next year, if I knock over this one goal, it proves our model is franchise-able. It brings in an extraordinary second set of reserve income that we can put towards taxes. It just seems like our tax burden just keeps growing and growing, growing. I could earmark the profit from this one venture into a tax reserve account that in our state would knock off all our state and federal taxes. That’d be a huge burden lifted…to know that I have one business that I started that can take care of all our tax burdens! Number three is, it gives me another proven business model.

I spend December trying to It’s my job to locate that one big goal, and there’s a lot of choices. Steve Jobs often said, “to pick the great thing, you’re going to turn down a lot of good things”.

You gotta focus on the one great thing and to do that you’re going to turn down a lot of good things.

Next, what I try to do is I meet with all my business partners and I need to give them one thing that if they just did for the next year, it would move the needle the most for them and their business. Maybe there are some opportunities that are there. Maybe we need to shore up a weakness. Maybe we just need to improve something that we’re failing at currently. Something within our business model is not working the way it should.

So I work with all of them and I find something that is one sentence. It’s something simple that they know every week whether they’re winning or losing.

I have a big white board in my office where I list out our divisions and who we have working. We have identified that the amount of people that we have on staff dictates the income. Well, it’s a service company, so that’s not really a hard one to figure out, but it’s important to put that into words. The white board keeps track of our revenue numbers and the amount of people working. I’ve studied all the things that would move the needle the most, and I found it. This is my job to work with one of my partners on so we can manage the numbers that make the biggest diffference.

In another division, we have a profit margin that we make on every large job, and that number had been dropping this past year at an alarming rate, and that dictates everything. If it hits a certain amount, then I make a certain amount of money and the company makes a certain amount of money, and this individual makes a certain amount of money. I told him very simply, every time you finish your job on my white board, I want you to write the name of that client and what our finishing percentage was. He’s going to see that number and see there’s a pattern here that the number drops to a number that is not favorable. He and I both know what the number is and we don’t want to see it. It’s a simple one thing. I’ve done similiar things with all my partners. You’re working with adults, but it doesn’t mean you have to complicate things.

You may not have partners, but you may have critical staff that you need to hold them accountable to one thing this year that they can do that will move the needle the furthest. With that being said, you need to set something that you’re involved in. I don’t need to bust my tail anymore, but I’m competitive and I want to hold myself to the same level as I do my partners.

I want to go look back at the end of the year and say to them, remember the one goal I had this year? It was *this* and it’s moved the needle. I’m holding myself to the same thing.